Inside Paper Moon Cafe, a small coffeeshop along North Second Street in downtown San Jose, a refrigerator and a set of shelves sit stocked with gallons of juice, loaves of bread and a bevy of produce and canned goods all for the taking, at no cost.

The little pop-up pantry, known as the San Jose Community Fridge arrives as demand for food soars during the pandemic due to to lockdown orders that have closed businesses and placed some of the region's most vulnerable residents in an even more perilous situation. Paper Moon Barista Arlyn Garcia hopes hosting the San Jose Community Fridge at the shop inspires more downtown businesses to clear some space for their own pantry nooks.

“There is so much more gentrification and redevelopment in downtown, so it would be more helpful to have more community fridges in the area because this might become a food desert,” Garcia told San Jose Inside. “The goal of the San Jose Community Fridge is to help the unhoused community and people who live right on our street to gain access to food.”

Other organizations across the nation have installed similar refrigerators and pantries to serve their local communities since the pandemic began, creating a lifeline during the pandemic, especially for low-income residents. Their core purpose is to offer up food in a convenient and easy-to-access location for the people who need it most. 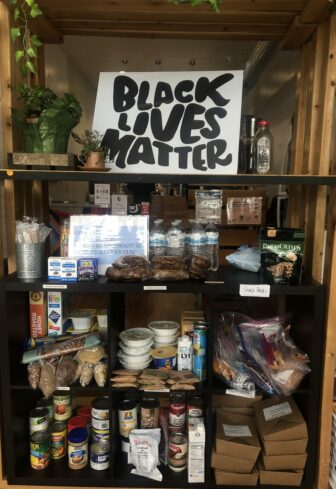 The pantry inside Paper Moon Cafe, called the San Jose Community Fridge, is supplied by donations and organized by volunteers. (Photo courtesy of Paper Moon)

Already an issue before the pandemic, food insecurity numbers have skyrocketed throughout the Covid-19 crisis. Second Harvest of Silicon Valley, one of the country’s largest food banks, has scrambled to meet demand that has doubled in the last year to 500,000 clients a month.

The city of San Jose, which has been using federal CARES Act money to feed a growing number of hungry residents, reported a 15 percent uptick in recipients in December alone.

In Santa Clara County, information compiled by the nonprofit Feeding America shows that 7.2 percent of residents were food insecure, or hungry, in 2018. Meanwhile, the share of Santa Clara County households receiving CalFresh food assistance climbed 81 percent between February and June 2020, according to state data.

Eric Glader, the director of community engagement at the San Jose Downtown Association, said Paper Moon Cafe has shown time and again it wants to be a difference-maker.

“They pay it forward by taking care of people around them,” he said. “What is awesome about Paper Moon is they’re not just a communal kitchen. Someone can come in and pick up a clementine or eat a cracker, and no one is looking to judge anybody. They also do cool things like pop-ups to support micro-businesses and their neighborhood.”

Paper Moon also donates containers of coffee and tea to Feed The Block San Jose, which distributes packaged meals for the unhoused community.

The latest effort with the San Jose Community Fridge came after a conversation with a friend left Garcia wondering why no such pantries existed downtown. Then she set out to do something about its absence. Last November, Garcia and owner Jerry Wang met with organizers from the San Jose Community Fridge to get one installed at Paper Moon, located at 17 North Second St.

“Before we met, they were actually reaching out to local businesses in the downtown area but missed us by one street,” Garcia said. “They were looking for someone to host and we wanted to do it. The response from the community has been great because we’re getting donations from a lot of people.”

The pantry relies on donations and volunteers to keep it fully stocked, clean and organized. Donation, both food or monetary, go directly into the fridge and community aid. More information about donating can be found on the San Jose Community Fridge website.