A five-alarm apartment fire that erupted in San Jose Tuesday morning has injured at least 15 people and displaced 120, authorities said.

Investigators say the blaze ignited in the kitchen of a second-floor flat at Summer Wind Apartments, 2079 McLaughlin Ave. before spreading to all 36 units of the complex. Firefighters had to rescue about 20 people from balconies, according to news reports.

Of the wounded, most were treated at the scene while four had to go to the hospital.

The American Red Cross has been helping displaced residents at the apartment’s community clubhouse, where volunteers have set up cots and handed out blankets, comfort kits and meals.

The City is providing meals for #McLaughlinFire victims. Thank you @AmericanRedCross for your assistance 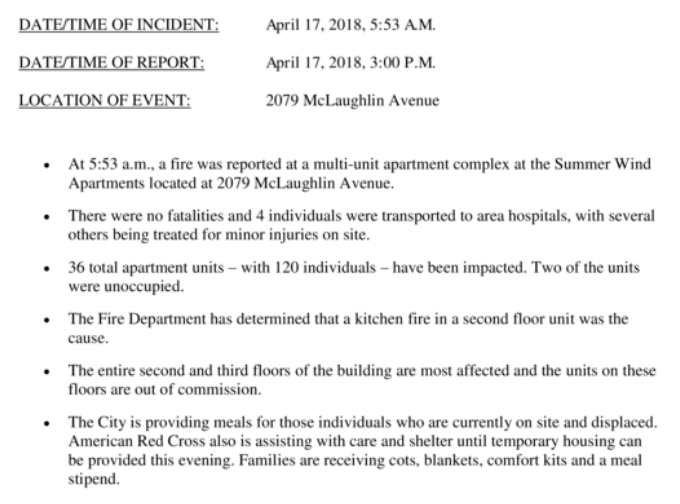 “I’d like to thank the many San Jose firefighters who responded to this morning’s fire and safely evacuated every resident without any major injuries,” Liccardo said. “Their extraordinary efforts serve as a reminder of the many ways that our first responders help keep us safe every day. Our thoughts remain with all of the families and individuals who have been displaced by this fire, and I’d also like to all of the city employees and community partners, like the Red Cross, who are currently working to offer care, food, and shelter to these residents.”

San Jose officials say the fire started around 6am Tuesday and rapidly spread to a few-dozen units at the three-story complex. But because firefighters arrived quickly, officials said, there were only minor injuries.

This picture shows how important it is to close bedroom doors at night. A closed door will provide several minutes to escape a house fire. pic.twitter.com/p2LZVx0aXs