San Jose’s tallest buildings, the new MIRO twin-towers near City Hall, today received the coveted Golden Nail award from the San Jose Downtown Association for its unique use of angled windows in the twin towers.

The new 28-story mixed-use residential project will eventually have an estimated 1,000 residents in 630 units, one of a number of new buildings praised by the association at its annual meeting as contributing to a new “really distinct skyline” for San Jose, said association executive director Scott Knies. 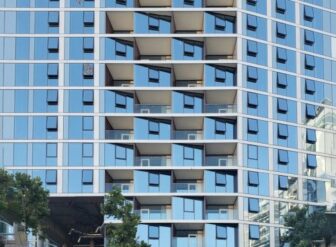 The buildings, with 1.1 million square feet of space. rose on the site of a former car wash at the eastern edge of downtown.

It will feature retail space on the street level. Steinberg Hart describes the buildings as “fusing the art of spatial storytelling with the commitment to bettering downtown.”

The towers sit atop a parking structure with four levels of above-grade, three levels of below-grade parking, and a landscaped roof with pool deck and amenities for residents’ use.

The ground level of the parking structure is programmed with approximately 15,000 square feet of retail along E. Santa Clara Street wrapping around to 4th and 5th Streets. 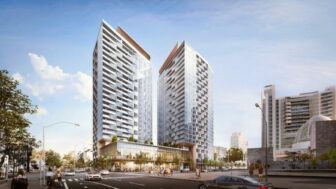