The San Jose Downtown Association has named Alex Stettinski to succeed Scott Knies as its CEO.

Stettinski is currently executive director of the Downtown Reno Partnership and previously headed the Beverly Hills Chamber of Commerce as executive director from 2011 to 2015. He also ran The Avenues of Art and Design business improvement district (BID) in West Hollywood and served as Director of Marketing and Communication for Los Angeles’ Downtown Business Improvement District.

The new CEO was selected after a nationwide search conducted by the HRS Executive Search firm to replace Knies, who has led the association for 34 years and retires in November as part of a planned transition. A roast and farewell dinner for Knies is planned for Oct. 29 at the Signia hotel.

Current SJDA board President Alan “Gumby” Marques led the search committee and cited Stettinski’s
knowledge of business improvement districts plus his focus on marketing, business recruitment, small
business retention and support of the arts as key strengths. (Disclosure: San Jose Inside’s executive editor was a member of the committee.) 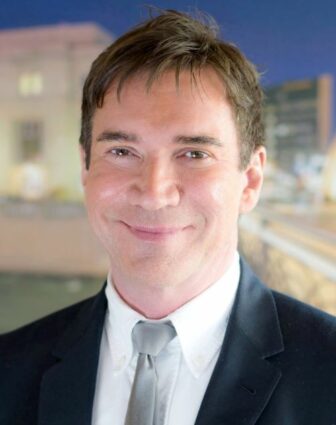 “The committee was particularly interested in learning of a Clean and Safe program Alex built in Reno which brought various community leaders together to identify compassionate and award-winning solutions to homelessness,” Marques said. He added that the seven-member selection committee comprised of current and past SJDA and Property Business Improvement District (PBID) board presidents was unanimous in its vote to appoint Stettinski.

“I am eager to move to San Jose and look forward to helping downtown rebound from the pandemic-related slowdown,” Stettinski said. “When I walk the streets of downtown San Jose, I see so much potential, and I believe I will bring a fresh outlook to problem-solving and place-making.”

Stettinski takes over management of SJDA’s two assessment districts and its three related non-profit organizations: the PBID, San Jose Downtown Foundation and Downtown Community Development Corporation. The PBID, best known for its Groundwerx services and street life programs, was renewed June 14 for another 10 years by an overwhelming majority of downtown property owners – 89 percent of whom voted to reaffirm the PBID.

In Reno, Stettinski worked with business and property owners to re-balance downtown and address a multitude of clean and safe issues. Reno’s social outreach program was recognized by the International Downtown Association with an Award of Excellence in 2020.

Stettinski was born in Geneva, Switzerland, and first moved to the Bay Area in 1989 to pursue a graduate degree at UC Berkeley. He  speaks German, French and English. He is an avid bicyclist and plans to reside in downtown San Jose.

The SJDA represents downtown business operators who pay annual assessments to promote downtown. A second district funded by property owners is also managed by the association. The SJDA and its affiliated entities have combined annual revenues of approximately $6 million.

The San Jose City Council on June 8 certified a vote to extend and expand the boundaries of the SJDA-managed Downtown San José Property-Based Business Improvement District (PBID). The district operates the Groundwerx crews that engage in beautification plantings, tree trimming, lighting and security services. The new district will generate more than $50 million over the next decade, the association projects, and will include Google’s Downtown West development.