Apple has divvied up the first $400 million of its $2.5 billion housing commitment, the Cupertino iPhone maker announced Monday.

The first tranche of funding will help push forward more than 1,000 units of affordable homes across Silicon Valley, including at least three projects in San Jose and Santa Clara.

Several Bay Area tech companies, including Google and Facebook, have committed to giving billions in cash, grants and land value to reduce homelessness in the housing-strapped region over the past year.

But Apple’s promise is the largest of the bunch and includes a plan to rezone commercial land in north San Jose to allow housing development.

The tech giant’s announcement Monday comes four months into a pandemic that has slowed or halted construction projects across the Bay Area and placed more residents on the precipice of eviction in the already housing-strapped region that the biggest tech companies in the world call home. As of the last count in 2019, more than 9,700 people were homeless in Santa Clara County.

“As cities and states have been forced to pause many of their long-term affordable housing investments amidst the current public health crisis, Apple is proud to continue moving forward with our comprehensive plan to combat the housing crisis in California,” Kristina Raspe, Apple’s vice president for global real estate and facilities said in a statement Monday.

Among the new commitments are four new projects funded through a partnership with San Jose-based nonprofit Housing Trust Silicon Valley, which Apple offered $150 million to use for low-interest loans for hard-to-fund housing projects.

Though Apple and Housing Trust officials aren’t naming all of the projects being funded, each confirmed two were in San Jose, one in Santa Rosa and one is in Pittsburg, California, which is in Contra Costa County. One of the projects is being developed by San Jose-based Charities Housing Development Corp. 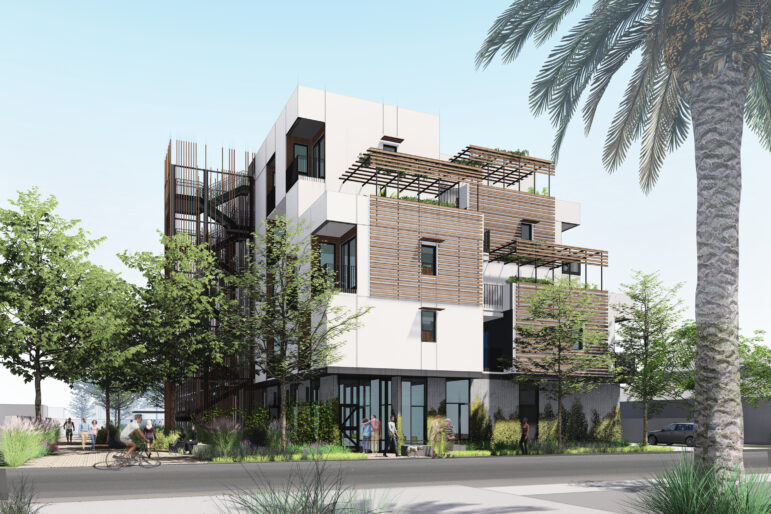 The Page Street housing project at 329 Page St. in San Jose is being developed by Charities Housing and will include 82 units. (Photo courtesy of Apple)

“The lives of 250 families in the Bay Area are going to change for the better, and we're only at the start of this unique partnership with Apple,” Julie Mahowald, interim CEO of Housing Trust Silicon Valley said in a statement Monday. “We're excited to see these and other loans to closing, and then through the day this new affordable housing welcomes new residents.”

Many of the 250 new homes will be reserved for veterans, homeless or formerly homeless residents and people with developmental disabilities, according to Apple.

Destination: Home, a San Jose public-private partnership focused on ending homelessness, has used part of its $50 million from Apple to help fund the construction of more than 1,000 “deeply affordable” homes across Silicon Valley. Of those new units, 80 will rise in Santa Clara and be set aside for seniors who are homeless or at a high risk of becoming homeless.

“Apple’s contribution could not have come at a more crucial time, as the COVID-19 pandemic has only made our work to end homelessness that much more urgent,” Jennifer Loving, Destination: Home CEO said in a statement. 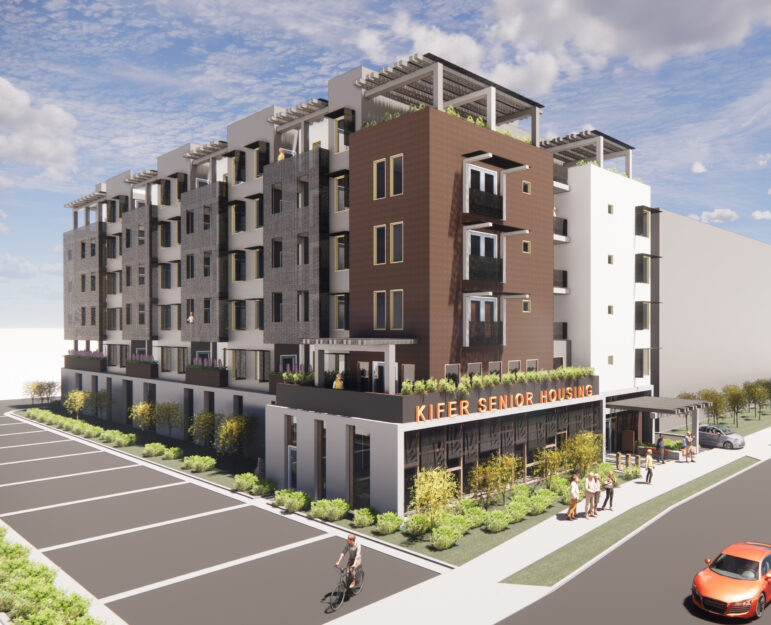 Kifer Senior Housing in Santa Clara will include 80 units of affordable housing for homeless seniors, or those on the verge of homelessness. (Photo courtesy of Apple)

In addition to investing in several new developments, the nonprofit expanded its Homelessness Prevention System, helping 1,500 families annually from losing their homes—a 67 percent increase compared to a year ago, according to the organization.

In recent months, hundreds of first-time homebuyers have been helped by a new mortgage and down payment assistance program Apple launched with the California Housing Finance Agency. The program focuses on low- and moderate-income residents with an emphasis on teachers, veterans and firefighters. More than 65 percent of the borrowers so far identify as Hispanic, Black, Asian, Pacific Islander or American Indian, according to Apple.

Later this month, the company will launch a new affordable housing investment support program with the California Housing Finance Agency to offer funding for new low-income housing over the next five years.

“At a time when so many members of our community are facing unprecedented challenges, we believe it’s critical to make sure that their hopes for the future are supported through tangible programs and results,” Raspe said.