Two private school-educated Italian-American lawyers who have spent the majority of their careers in government jobs will face off in November with hopes to become mayor of Northern California’s largest city.

Both Dave Cortese and Sam Liccardo spent close to a million dollars to make the runoff for a job that comes with a long punchlist of challenges. San Jose is still paying off more than $5 billion in debt from a two-decade building spree that took off in the mid 1980s. The city bears the cost of providing services and amenities for a million residents, many of whom work in rich neighboring cities that, due to a structural jobs-housing imbalance, reap a disproportionate share of the region’s tax revenues. That’s the reason why the grass is literally greener in Sunnyvale, Cupertino, Palo Alto and Santa Clara, while San Jose’s parks are pitted with gopher holes. 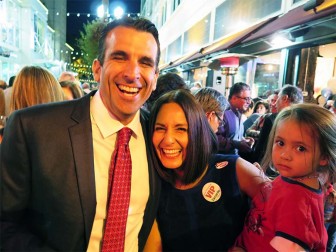 Sam Liccardo, celebrating here with wife Jessica and a borrowed baby, will face off against Dave Cortese in November for mayor of San Jose.

Efforts to enforce budget discipline have left scars on San Jose’s political culture and on public safety workers, whose ranks have been depleted amidst scorch-and-burn strategies by both sides.

Mayor Chuck Reed, frustrated by efforts to cut a deal with the unions over pensions and pay, went to voters to enact takebacks that have been hamstrung in the courts. Four members of his pro-pension reform majority on the council ran for mayor in this month’s primary. Together they won 62 percent of the vote, seven points shy of the 69 percent who approved the controversial Measure B pension reform measure two years earlier.

Cortese says he wants to bring the city together again, heal the wounds and detoxify the polarized climate at city hall. Heavily backed by an undivided coalition of public employee unions and the labor-controlled local Democratic Party machine, the county supervisor and former San Jose vice mayor pulled two points more than the 31 percent who opposed 2012’s pension measure.

He ran a polished campaign, wearing gray mayoral suits and staying on message while his goofier opponent showed up in bicycle helmet, cream colored suits and brown shoes, talking about things like music pavilions, sidewalk cyclists and pop-up stores.

The supervisor’s battle will be to convince another 17 percent of the electorate that a Cortese-led administration won’t embark on a spending spree like the city did when Cortese was on the council in the dotcom boom’s wake, approving salaries and pensions that couldn’t survive an economic downturn. He may also have to answer questions about his political bedfellows, who’ve been getting voted out of office and going to jail after their corrupt activities were exposed.

Cortese has tried to position himself as a unifying statesman. He cites his 2005 vote to oppose 90 percent pensions as proof of his fiscal responsibility, though analysts disagree on the underlying reasons for the vote and suggest he may have wanted an even more generous package for the city’s firefighters.

Both candidates will make rebuilding the police force and improving public safety centerpieces of their campaigns. Cortese will call himself the candidate of “change,” citing rising crime as the product of failed policies. Liccardo will cast Cortese’s talking point as merely a return to the days when unions got everything they wanted at city hall.

Liccardo will also champion a new urbanist vision of high-rise housing, transit alternatives and downtown as a regional cultural destination. With shiny new housing towers popping up and the commercial vacancy rate dropping, the economic winds will provide visuals to illustrate his economic and social roadmap.

It’s hard to predict the future, but one thing's certain. The hard-fought race will clog mailboxes and break expenditure records over the next five months as two guys with similar backgrounds but different allegiances battle to shape the city’s future.