The Food and Drug Administration is the man at the end of the bar that you would prefer tells his story walking. His claims are rote, the bark of calamity whistling through his toothless bite.

We’ve seen the impotence in how the FDA regulates antibiotics in meat, or how feeble it is to regulate supplements that are shamelessly mislabeled and continue to kill us one weight-loss fad at a time. But the FDA’s continued ban on allowing gay and bisexual men to donate blood is not toothless—it’s spineless.

Millions of Americans are being denied an altruistic right to help others, based on a dogmatic approach to science that should be relegated to the Reagan era.

On Monday, local elected leaders and health experts gathered outside of the county building and called on the FDA to change its policy.

The press conference came just a year after Evan Low, mayor of Campbell and a state Assembly candidate, was asked to host a blood drive by the Red Cross. The humanitarian organization was unaware at the time that Low, a human, was also gay. 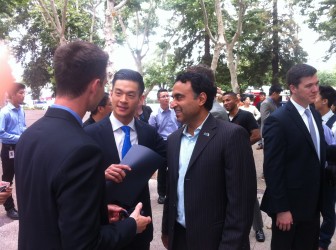 Men who have sex with men (MSM) are barred from donating blood if they’ve had sex after 1977. Low was born in the early 80s, which meant he was just young enough to be allowed nowhere near a needle. He hosted the event anyway, raising awareness and proving he’s a bigger man than most.

“We need to continue to put pressure on the FDA and Health and Human Services Department that were focused on the real public policy issues,” Low told San Jose Inside. “This happened very organically. I was aware of this issue but it was not a top priority. But it was very real to me, because I experienced what it felt like to host a blood drive but not participate."

To be clear, the science has improved to the point that forbidding gay men from donating blood—when there is and has been a very real national blood shortage­—is just another form of institutionalized discrimination. African Americans contract HIV at a disproportionately higher rate than the rest of Americans, and yet there is no ban on donating blood if you’ve been black since 1977. Thankfully.

Risky sexual behavior cuts across the sexual orientation spectrum and the threat of false negative test results is a fact of life.

What’s also real is many of the people who receive donated blood don’t give a damn where it comes from, as long as it helps them get better. 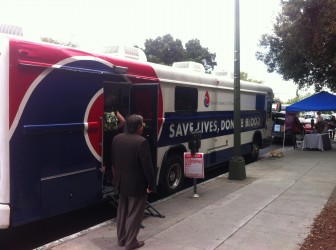 A mobile blood bank parked just outside the county building.

Lynn Walton, of Santa Cruz, came to Monday’s event to speak out about the absurd ban on her gay son not being able to donate blood that would assist her other son get the blood plasma he needs to survive.

Her son Douglas, 26, requires what’s known as Intravenous immunoglobulin (IVIG) to keep him alive. To produce the plasma, thousands of donors’ blood is synthesized for a single treatment. Her older son, John, 38, wants to help but has been banned from donating—not because he’s unhealthy but because he’s been stigmatized as unhealthy.

“I think the archaic laws that were set in place in the ’80s need to go away,” Walton said. “I’m convinced that with their screening processes my younger son would be safe.”

National Gay Blood Drive will be holding events around the country Friday, and a petition to the White House can be found on the organization’s website.