In addition to its perennial reminders of mounting housing costs and traffic woes, Joint Venture Silicon Valley’s latest health check on the local economy offers a fascinating look at where the region is heading.

The just-released 2019 Silicon Valley Index notes considerable demographic shifts, for starters, with Asians becoming a plurality for the first time in the area’s history and women attaining greater representation in technology jobs and local government.

It shows that the geographical Silicon Valley—defined in the study as Santa Clara, San Mateo and San Francisco counties with parts of the East Bay and Santa Cruz—gains one immigrant every 26 minutes and loses a resident every 24. That 17 percent of the valley’s high-tech workers hail from California and that the 65-and-up population mushroomed by 35 percent in the past decade. It shows that Santa Clara County accounted for 81 percent of regional job gains and, for better or worse, reached full employment.

One of the report’s most compelling takeaways, however, is the extent to which Silicon Valley is hobbled by its own success. Startups leave for cheaper climes as homegrown tech behemoths slurp up smaller counterparts in a flurry of acquisitions that remove innovation from public view and continue declines in early-stage funding. 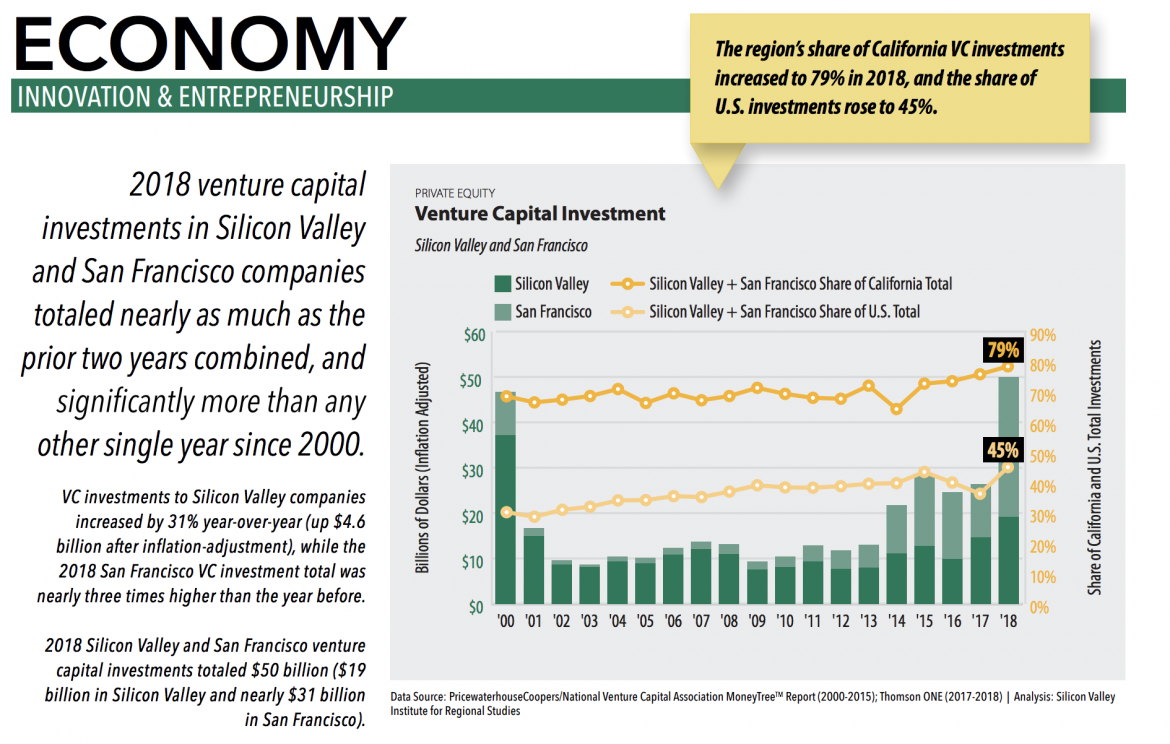 A record-breaking $50 billion in private capital bankrolled 81 mega-deals in 2018, per the report, including an investment in e-cigarette giant JUUL Labs that itself accounted for $13 billion. Silicon Valley spawned nearly 20,000 patents in 2017 and generated $5.9 billion from last year’s 28 initial public offerings.

Yet after a hiring boom that lasted the better part of a decade, Silicon Valley’s white-hot jobs market has begun to cool as the cost of living skyrockets, companies outsource labor to more affordable places and the wealth gap ever widens.

Employers increasingly struggle to attract and retain workers, who balk at the multimillion-dollar mortgages and hours-long commutes so often required to live in the Bay Area. And while the likes of Google, Netflix and Apple can afford paying yearly salaries that push the regional average to $140,000 a person, the lower-paid segment of the economy that supports them—teachers, servers, cops, roofers, security guards—rely on family, housemates or side-hustles to keep a roof over their head and cover childcare fees that ticked up 57 percent from 2012 to 2018.

Despite outward migration induced by the punishing toll of calling Silicon Valley home, employment kept growing—just at a slower pace.

The region added 35,558 new jobs from June 2017 to the same time last year as multinational corporations expanded their real estate footprint to the point that five of them alone—Google, Apple, Facebook, LinkedIn and Amazon—now lease about 18 percent of the region’s office, research and development space.

Joint Venture CEO Russell Hancock describes the report’s findings as “something of a Rorschach test,” with plenty to cheer about—and as much cause to worry.

“What’s newly disquieting are indicators suggesting our fundamentals might be changing,” Hancock writes in his summary of the 100-plus-page inquiry. “More companies are leaving the region than coming into it. These same companies are acquiring smaller ones at a pace we’ve never seen, changing the messy way innovation has typically happened here, perhaps even stifling it.”

It would seem the mythology of the Silicon Valley garage as a birthplace for innovation loses resonance when the median price of the attached homes exceeds seven figures.

The sweeping study published earlier this week comes in the nick of time for Joint Venture’s annual (and at this point sold-out) gathering of elected officials and local leaders to discuss the economic challenges, chances and future of Silicon Valley.

WHAT: State of the Valley conference
WHEN: 8am to 12:30pm Friday
WHERE: San Jose McEnery Convention Center
INFO: 408.298.9330 or jointventure.com