In essays that ultimately convinced Stanford University to accept his application, Antonio Milane described the incredible odds he beat to even consider such an elite institution.

The soon-to-graduate high school senior from Paloma Valley High School in the Southern California town of Menifee wrote about how doctors didn’t expect him to survive infancy, let alone childhood with severe cerebral palsy. He wrote about how his immigrant parents endured “all the tolls that come from inhabiting a new country” while helping him navigate life with a mobility-limiting neurological disability.

“Throughout my school career,” he said, “my parents struggled to get me support.”

Meetings about what devices and other accommodations he required to succeed academically dragged on for hours, he said, and often to little avail. He wrote about having to become his own advocate while still in middle school because of his father’s death and his mother’s language barrier as a native Spanish speaker.

“When I entered high school,” Milane continued, “officials took advantage of my naivety and made me believe that I did not need supports.”

Though advanced-placement course concepts seemed easy enough for him, Milane said he couldn’t fulfill writing assignments without a scribe. “This created a lot of frustration inside me,” he wrote, “because I knew that I was capable of more. However, my broken hands would make it impossible for me.”

It wasn’t until the second semester of sophomore year that the school gave him all the accommodations he needed. Milane said the yearslong battle gave him the courage to fight for his own rights and those of other disabled students. “My dream,” he pronounced in his college application, “is to make the world accessible for people like me.”

A few months ago, Milane received an acceptance letter from Stanford University, where he plans to study politics and computer science in hopes of later attending law school to become a disability rights attorney.

But almost as soon as he celebrated a dream come true, he found himself in an all-too-familiar fight—only this time with tens of thousands of people cheering him on.

The latest battle began shortly after the New Year.

On Jan. 11, while recovering from a bout with Covid-19, Milane found out that while the university’s Office of Accessible Education (OAE) agreed to hire a scribe for labs, tests and lectures, he’d be on his own for homework. As OAE Director Teri Adams explained in an email to the prospective freshman, that’s because anything outside class would be considered a “personal service,” and thus beyond the school’s obligation to provide.

Milane’s requests for out-of-class writing help were denied again on Jan. 25. Emails he sent between meetings imploring Stanford to reconsider went unanswered, he says. Instead, Stanford suggested he go to the school’s financial aid office or find support from nonprofits such as the Opportunity Fund or Silicon Valley Independent Living Center. Milane obliged, requesting help from all three.

By press time, none had responded with any guarantee.

In early February, Milane escalated his pleas to Carleigh Kude, Stanford’s assistant OAE director, who again declined the requested accommodation. Stanford’s ADA compliance officer, Rosa Gonzalez said the same and noted that Milane has no right to appeal the decision until he’s a matriculated student.

He tried one more time on Feb. 22 only to hear the same answer.

Finally, and he says reluctantly, he went public. 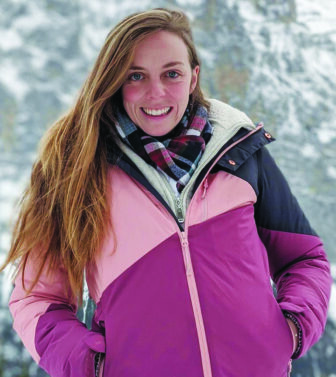 Civil Writes: Alexis Kallen has cerebral palsy and attended Stanford University before becoming a Rhodes Scholar and then enrolling in Yale Law School. She offered to help advocate for Antonio Milane after hearing his plea on social media. (Photo via Facebook)

On Feb. 22, Milane took to Instagram, where he uploaded a screenshot of Stanford’s most recent email reiterating the decision to deny scribing services for homework.

“I could really use your help right now,” he wrote in the caption, where he introduced himself, described his disability and detailed his futile attempts to get Stanford to grant his request. “I will not be able to attend Stanford if I do not get this scribe,” he explained. “If you could please share this post, it would mean a great deal.”

Milane’s plea, which he followed up with a video, went viral. Campus journalists at the Stanford Daily picked up the story, amplifying his call for support under an article headlined, “Ableism is Real at Stanford.”

Alexis Kallen saw Milane’s plea on Instagram and reached out.

As someone with cerebral palsy who attended Stanford before becoming a Rhodes Scholar and enrolling in Yale Law School, the 24-year-old says Milane’s message reminded her of how she felt at his age, on the brink of so much opportunity but shouldering the added burden of having to fight for certain accommodations.

“As someone who has been a student with a disability at Stanford, I can’t say I was surprised at what Antonio was going through,” she says in a recent phone call. “So I told him that I understand, that I have a passion for these issues and was happy to help write emails or letters or whatever he needed.”

Kallen told Milane about Sylvia Colt-Lacayo, who found herself in much the same predicament a couple years ago.

In 2019, as an incoming 18-year-old freshman with a degenerative neuromuscular disease, Colt-Lacayo realized it was up to her to figure out how to pay for the 18 hours of personal assistance doctors said she’d need to live on campus.

It took months for Colt-Lacayo to solve her conundrum. The Oakland teen turned to GoFundMe, raising $8,000—enough for a month of care. A family member offered to loan her the rest. Eventually, she found out through a fellow Stanford student about a program to fund additional accommodations through the California Department of Health Care Services. She applied, and, despite a two-year waiting list, got a nurse to reevaluate her needs in a matter of weeks.

Still, Colt-Lacayo told the Los Angeles Times in 2019, “you have to fend for yourself to find this information. So many people don’t end up achieving their goals because they don’t know how to get the care they need.”

Despite medical advances that have improved and prolonged the lives of disabled youth, they face enormous barriers once they try to leave home. While the government pays to place them in nursing facilities, home-based care is systemically underfunded.

All of which, Kallen says, should be a non-issue for an institution as monied as Stanford.

Michele Dauber, a Stanford law professor who has called the school to task over its treatment of other vulnerable students, echoes the sentiment.

“I am dumbfounded that this is even a question,” she says. “Antonio needs scribe support to do his homework. Stanford’s refusal to provide this support is just like asking a student in a wheelchair to pay for their own ramp to get to class.”

Even if Stanford has a legal right to deny Milane a homework scribe, that doesn’t mean it should—especially as an academic powerhouse with a $28 billion endowment and a professed commitment to diversity, Kallen says. High schools often meet a higher standard of disability accommodations with far fewer resources, she noted.

“If Stanford is going to accept applications from people with severe disabilities, then they need to be able to provide them with the accommodations that made them successful in the first place,” Kallen tells San Jose Inside. “I think that should be part of their commitment to being an inclusive university.”

“Our goal is to ensure that students with disabilities have their individual needs addressed, so they can take advantage of every academic opportunity the university provides and maximize their access,” he wrote in an email to San Jose Inside Monday.

OAE, he continued, “provides academic and housing accommodations for students with disabilities through an interactive, individualized assessment process. Our advisers work closely with students to understand their unique disability experiences and determine appropriate accommodations.”

Though Miranda declined to comment on Milane and his needs specifically, for privacy’s sake, he says Stanford helps students find other resources for accommodations “outside of what is covered” by the OAE.”

In an Instagram video posted Monday after Milane’s latest meeting with university officials, he lamented wasting another hour of his life to hear the same refrain. “They basically told me that Stanford doesn’t have the resources to accommodate every disabled student at their school,” he said, “and that they’re going to struggle to do that.”

When reached the next morning, Milane said that his only other option is to appeal to the public. It’s tough, he adds, because he doesn’t like to ask others for money.

Absent a legal challenge or legislative fix, however, that may be the only recourse.

“It’s unfortunate,” Kallen says. “People with disabilities are so segregated and so often don’t get into these levels of society or education because of barriers like a lack of access. Personally, I was the first disabled person that a lot of the people I knew at Stanford ever were friends with, and because I was there, so many of them went on to their careers thinking about how to make spaces for the disabled community.”

At least fellow students and people far beyond Stanford are stepping up, she says. By press time, a Change.org petition urging the university to pay for Milane’s homework scribe garnered well over 52,000 signatures.

“That blew my mind,” Milane says. “I didn’t think that many people would care.”