When Gigi turned 4, her heart turned 3.

She has no memory of the transplant or the nine months she spent linked to a plastic pump that kept the blood flowing until doctors found her a new one.

“Can I show this to Gigi?” Virginia Becker asks the girl’s mother, Monadella Vidales, who nods in approval.

Becker crouches down and flips a glossy image toward the girl.

“Do you know who that is?” Becker coaxes.

Gigi smiles shyly and shakes her head; her brown eyes widen in curiosity.

“That’s you,” Becker says, pointing toward the picture she snapped three years before. “Look how tiny you were.”

The blown-up portrait shows Gigi at little more than a year old—a thick, black mop of hair, gap-toothed smile and one chubby leg kicked in the air. Atop a cloud-like pillow, she’s covered in plastic tubes, wires and bandaging. Protruding from her tightly wrapped midriff is a “Berlin Heart,” a German-made device drawing blood from her failing ventricles to a chamber outside the body before pushing it into her lungs.

“How about we take a new picture to show how strong you are,” Becker suggests.

After changing into a long white dress, Gigi poses for Becker in a sunlit lobby of the Ronald McDonald House in Palo Alto, where dozens of families stay indefinitely while their critically ill children undergo treatment. In one picture, Gigi sits by an antique typewriter with a sheet of paper that reads, “I love my new heart!” In another, she holds a bouquet of white roses. Next, she’s the Queen of Hearts with a heart-tipped scepter and a heart-adorned felt crown.

“Let’s do the before and after now,” Becker announces, handing her the baby portrait.

Gigi, seated against a white backdrop, props up the photo with her right hand.

“Do you have a special heart?” Becker asks, popping her head up from behind the camera. “Can you show us?”

Gigi pulls down her dress collar to reveal a thick, shiny scar.

Virginia Becker, 62, founded the Family Album Project to photograph milestone moments of society’s most vulnerable—the sick, bereaved, elderly, homeless and destitute. Since launching the nonprofit seven years ago with her husband, 68-year-old Albert Becker, she’s given away tens of thousands of studio-quality prints for free. 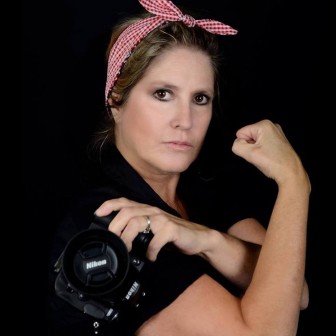 “When I started, I knew why I wanted to do this without knowing how,” says Becker, who lives in the mountains south of Los Gatos. “I tell people that I basically didn’t know the difference between an F-stop and a bus stop.”

The gregarious, infectiously upbeat former schoolteacher had already embarked on dramatic career changes. She dabbled in acting, ran a tattoo parlor and taught special education. But Becker’s interest in photography stemmed from a deeper sense of purpose, which came to her while helping a friend whose mother died.

“We were preparing for the service and noticed that there were so many photos from when she was younger, but nothing from the last 10 years of her life,” Becker says. “Nothing since the digital age.”

Though smartphones have led to an epidemic of over-sharing, she says the snapshots are no substitute for the art and intention of a good portrait.

“I thought if we could get the hard copy print back into circulation, we’d preserve these personal histories,” Becker says. “I wanted to give people something to hold and to share, to put in a shoe box and pass to new generations.”

After learning the basics of photography, Becker and her husband began mining their personal connections for people and places to shoot. Early referrals brought them to a senior center in Novato, to the Ronald McDonald House by Stanford University, to foster youth and low-income apartments, to youth camps for cancer survivors and high school proms for students with special needs.

“It really is like a key,” Becker says of her craft. “The camera opens the doors into all these lives and all these places you might never have gone to.”

The Family Album Project has also memorialized moments that might otherwise have been forgotten. With Becker behind the lens and her husband behind the laptop, the couple began photographing those marginalized and struggling—critically and terminally sick children, seniors grappling with loneliness and isolation, families struggling to keep a roof over their heads and people without any home at all. In each photograph, Becker tries to convey the subject’s personality, strength and dignity. 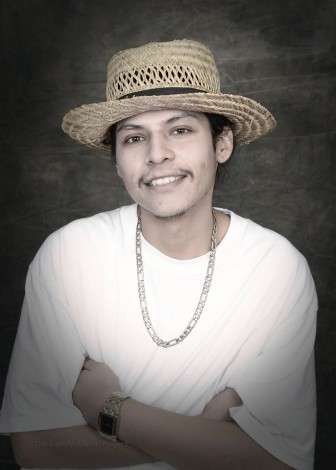 Little Mike. “Maybe if we stop looking at our homeless as a tent with blue tarp and start looking at them as the valuable human beings that they are, maybe things might change,” Virginia Becker wrote after finding out that Little MIke got shot. (Photo by Virginia Becker)

Through the Family Album Project, Becker has landed a number of separate and ongoing assignments that connect her with people battling enormous hardships. As a volunteer for the Red Cross, she photographs people in the wake of natural disasters throughout the country. Through the nonprofit Now I Lay Me Down to Sleep, Becker takes keepsake portraits for parents grieving a dead baby.

“Sadly, we’ve taken a lot of photos that end up being used for someone’s memorial service,” she says. “But it helps you appreciate the moment that’s captured.”

Last month, inspired by their weekly sessions with the Downtown Streets Team—a local nonprofit that offers job training to the homeless—the Beckers trekked to a Salinas shantytown for another photo shoot. Among the many people photographed at the homeless encampment, called Chinatown by the locals, was a young man in his twenties who went by the name Little Mike. In one image, his arms are crossed over his chest, but he’s relaxed, smiling.

That night, he was shot in the face—the victim of one of several shootings in Chinatown that week. As far as Becker knows, he survived. But that photo became the last visual record of Little Mike unmarred by a bullet.

Last week, Monadella Vidales, a 32-year-old mother of six, flew down from Oregon for Gigi’s annual checkup at Stanford’s Lucile Packard Children’s Hospital. When they found out the Beckers were staging one of their biweekly photo shoots at the Ronald McDonald House a day after their planned trip home, Vidales delayed her flight.

“We didn’t want to wait until next year,” Vidales says. “Virginia became a big part of our lives. She caught every memory that we had here.”

Not three days after diagnosing Gigi with cardiomyopathy in March 2014, doctors sent her from Oregon to Lucile Packard to await a new heart. Vidales barely had time to pack before being transported on a medical flight with Gigi and her siblings in tow.

“Everything happened so fast,” Vidales says. “It changed everything, our entire perspective as a family.”

When Vidales and her brood arrived, Gigi was swollen, round and hairy, still an infant but pumped full of medication and steroids to keep her alive.

“When Gigi was diagnosed, a lot of people didn’t know how to react,” Vidales says. “They say things like, ‘it’s all going to work out.’ They’re kind of awkward about it.”

“She understands,” Vidales says. “She sees these families and these kids for who they are. She’s been there throughout these ordeals with family after family.”

Becker’s portraits of little Gigi, her mom and her siblings during their agonizing ordeal in 2014 now decorate the walls of the Vidales home in Oregon.

“They remind me how much we’ve changed as a family,” she says. “We learned how to live day by day and just appreciate the time we have with each other, with Gigi. I mean, even now, you never know if she may need a new heart tomorrow.” 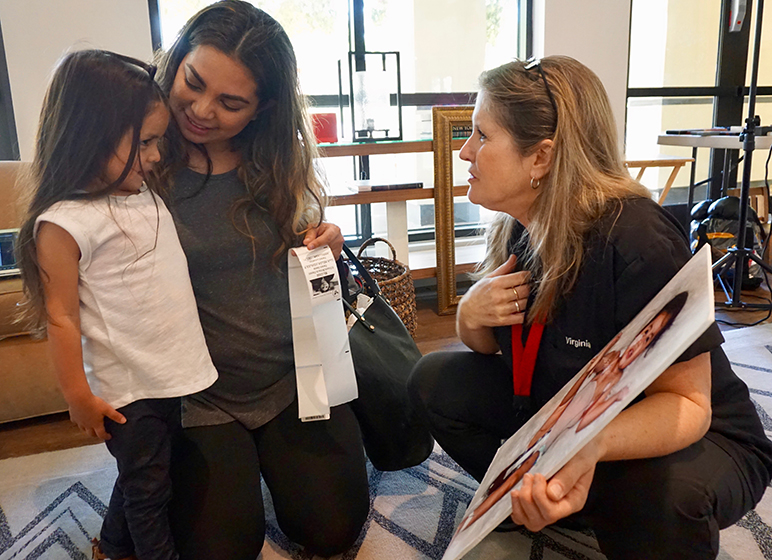 Virginia Becker (right) shows Gigi (left) a photo of her as a baby attached to an artificial heart. (Photo by Jennifer Wadsworth)