When Chinese-backed firm Z&L Properties bought the rights to develop Silvery Towers from KT Urban in 2015, the twin highrises symbolized downtown San Jose’s rebirth. But many of the workers toiling away in its shadows looked emaciated. Some went through the motions—pouring concrete, welding rebar, hoisting lumber—despite hernias, sprains and dislocated joints.

According to the U.S. Department of Labor (DOL), they had no choice.

Authorities say Z&L affiliate Full Power Properties hired an unlicensed contractor, Nobilis Construction CEO Job Torres Hernandez, who forced undocumented Mexican immigrants to work torturously long hours by day and sleep in a squalid shipping container by night. Victim advocates called it the most egregious labor trafficking case in recent memory. The scandal, which first made headlines a year ago with the arrest of Hernandez, finally caught up to Full Power last month when the DOL got the company to pledge $250,000 in back pay for 22 workers.

The luxury apartments climbing 22 stories into the sky have since become monument to unfettered greed and a flashpoint in the debate over what labor standards the city should impose on private development.

From a podium flanked by union members with banners condemning the labor violations, attorney Ruth Silver-Taube, who leads the South Bay Coalition to End Human Trafficking, called on Santa Clara County’s Board of Supervisors to adopt the strictest wage theft and labor trafficking laws in the nation. The policy, she said, should require cities that want a piece of a $950 million affordable housing bond passed by voters in 2016 to impose the same ordinance.

“What happened here at Slavery Towers is a stain on San Jose,” she said, raising her voice to carry over the din of airplanes flying overhead. “It can only be washed away if our elected leaders stand up and scrub this stain away with a clause that holds shady developers and their financial backers accountable for wage theft and for slave labor.”

More than simply casting doubt on San Jose’s ability to police private developers, the labor violations also suggest that Z&L Properties, whose owner Zhang Li co-founded and co-chairs Guangzhou R&F, one of China’s biggest real estate developers, might have waded in over its head. The sheer scope of Z&L’s and Full Power’s stake in the city’s residential market—four projects with a combined 1,873 units—also raises concerns about how the regulatory crackdown and union push for stronger worker protections will impact Mayor Sam Liccardo’s ambitious plan to build 25,000 new units by 2022.

Z&L spin-off Full Power incorporated in San Francisco in 2014 before acquiring Silvery Towers among a dozen developments valued at more than $2 billion as part of a Bay Area-wide buying spree. But the project, which initially aimed to bring 643 new apartment units to the city’s housing stock by this summer, soon fell more than a year behind schedule and drew backlash from unions for hiring cheap labor and for apparently exploiting a controversial loophole in a federal cash-for-visas program to secure low-cost financing.

Full Power spokesman Eric Podolsky insists that the DOL probe has done nothing to slow progress at Silvery Towers or the rest of the company’s projects in downtown San Jose: the 220-unit Park View Towers, 708-unit former Greyhound station and 305-unit North San Pedro Tower. Podolsky said the developer was “dismayed” to learn of the allegations against Nobilis and acted immediately upon learning about the violations. He dismissed the labor-led protest last week as nothing more than a self-serving publicity stunt to recruit new members.

“It’s all about money for the union,” Podolsky wrote on behalf of Full Power, which owns the projects, and Z&L, which manages them. “We have shown our commitment to the fair treatment of workers by immediately terminating the bad actor and working with the [DOL] to ensure that those workers were paid fairly. [The] demonstration does nothing more than to delay the progress we are making to create more jobs and more housing.”

San Jose Economic Development Director Kim Walesh said that before Z&L, Full Power and associated limited liability companies can break ground on Park View Towers or any other project, they must sign an affidavit promising not to retain the services of subcontractors with a history of wage theft.

“We received assurance that they’re clearly investigating the situation and also setting up a procedure to make sure that no such violations occur going forward,” Walesh said. “What happened [at Silvery Towers] was a horrible, unethical situation that was dealt with by the Department of Labor. So beyond that, we don’t have any reason to expect any impact on their other projects in downtown San Jose.”

Liccardo said he, too, remains confident that the labor violations will have little to no bearing on his grand plan for San Jose to build its way out of the crippling housing crisis.

“These are two separate issues,” he said. “Whoever’s responsible for wage theft and labor violations should go to jail, and regulators should enforce their laws and whatever sanctions are appropriate.”

The rising cost of wages, land and materials pose a bigger challenge to the 25,000-unit goal, the mayor adds, which is why he voted to put a bond measure on the fall ballot that would set aside $450 million for subsidized housing.

Silver-Taube said the city shouldn’t wait around for federal authorities to identify problems that the city could weed out on its own. Anyone could have looked up Hernandez’s licensing status and history of wage theft, including an unpaid $600,000 judgment from as recently as 2016. What happened at Silvery Towers showed her that neither the city nor developers could be trusted to meet even that low bar.

“All they had to do was go online and do a quick search,” she said in exasperation.

The ordinance Silver-Taube’s anti-slavery coalition and trade unions want the county to enact would deny building permits to contractors and subcontractors with wage theft, human trafficking, retaliation, threats of deportation and discrimination citations and repeat safety violations, she explained. Further, she said, the policy should give the county and cities full access to timesheets, payroll records and workers, allow them to consider factors other than the lowest bid and automatically disqualify contractors who don’t come clean about past violations.

“We saw the smoke of substandard wages, no healthcare and no retirement benefits for non-union workers on this job, and we see the fire of human trafficking,” he said during last week’s rally. “Will we continue to ignore the smoke on other jobs, or will we begin to enforce labor standards?” 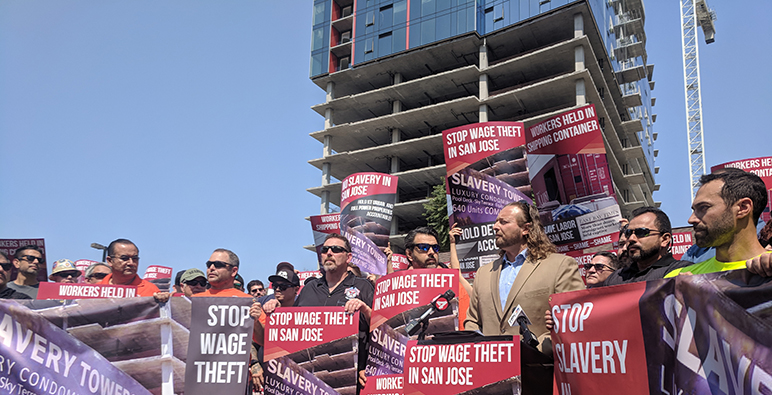