Hours after news spread that a satirical flyer put a Stanford University law student’s June 12 graduation and moral character on the line, massive backlash online and a slew of copycat ads cued officials to reverse course.

“The Originalist Case for Inciting Insurrection” was one of the hottest tickets on campus on January 6, according to a satirical flyer emailed to a student-run “law-talk” listserv.

Nicholas Wallace, a third-year law student, whipped up the spoof poster advertising an event hosted by Stanford law school’s chapter of the Federalist Society, a conservative legal organization that failed to disavow its members who participated in the Jan. 6 insurrection at the U.S. Capitol.

The flyer advertised that Missouri Sen. Joshua Hawley and Texas Attorney General Ken Paxton would discuss “doing a coup” and the “classical system of installing a government.” The group would also break down how “violent insurrection” can be “an effective approach to upholding the principle of limited government.”

Wallace sent the flyer out bright and early the morning of Jan. 25—nearly three weeks after the faux Jan. 6 RSVP.

For centuries, satire has provided a vehicle for folks to criticize public figures and expose political injustices through humor and imitation, but Wallace’s faux flyer was apparently too effective at poking fun at prominent Republicans.

According to FIRE, an unnamed student and Stanford Federalist Society officer first submitted a complaint to the school in March about being lampooned in Wallace’s email, charging that Wallace “deceived” students and “defamed” public servants. The unnamed student later pushed the school to initiate a formal investigation ahead of graduation, which Wallace learned about on May 27—the last day of classes.

“It has been a pretty awful way to close out my career at Stanford,” Wallace first told Slate Wednesday afternoon. He did not return San Jose Inside’s interview requests. “Instead of studying for finals, I’m trying to figure this out. I just sent an email to my family trying to reassure them that I haven’t blown it in my last few days at Stanford.”

If no reasonable person would believe that Hustler Magazine ads depicting Rev. Jerry Falwell having sexual encounters with his mother in an outhouse were true, surely a forged poster about an event weeks in the past would pale in comparison, right? Does sly satire violate Stanford University’s school policies and code of conduct?

Within hours of Slate's first story publicizing the issue, Stanford’s Office of Community Standards dropped the complaint against Wallace and lifted the hold on his degree. Stanford spokesperson E.J. Miranda wrote in a statement that school officials “followed our normal procedures and conducted a factual inquiry” and “the complaint was resolved as expeditiously as possible.”

Wallace returned to the student “law-talk” listserv to share the news, thank supporters and his hopes for the issue moving forward.

“Whether we are demanding accountability from the people who supported the insurrection, challenging the ongoing deluge of voter suppression laws in state legislatures, reminding [Stanford Law School] administration that white supremacy lives here too, we’re brainstorming ways to decarbonize our society, it is vital that we keep the dialogue going,” Wallace wrote in an email, notably sans satire. “I hope to work with Stanford in the little time I have left to make sure that no student is subjected to an abuse of process in this way again, and to develop better protections for its students’ freedom of expression.” 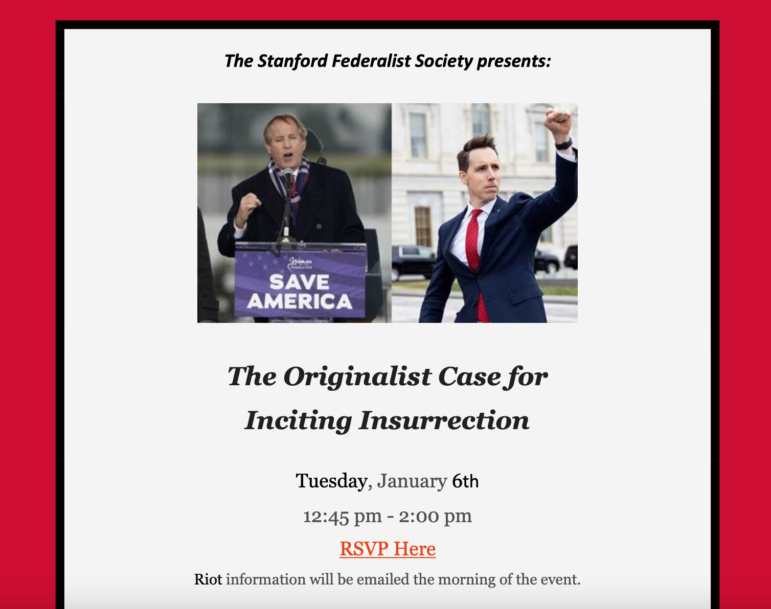 Adam Steinbaugh, an attorney with the Foundation for Individual Rights in Education who defends freedom of expression and due process for students and faculty, found the entire situation laughable.

In between chuckles, Steinbaugh explained that satire is a time honored tradition and style of argument, especially within the halls of higher education and law school organizations. On top of the incredibly high burden of proof needed to support defamation charges, he said, California’s “Leonard Law" bars most private colleges from disciplining students for any speech otherwise protected by the First Amendment.

FIRE officially demanded Tuesday an end to the hold and investigation against Wallace, but Steinbaugh assumed alarms were finally set off within Stanford’s internal operations after the issue trended on Twitter. He deftly bet Stanford would drop the issue by sundown.

“If you dropped this on a judge's desk, you’re either leaving there in a hurry or you're staying in handcuffs,” Steinbaugh told San Jose Inside Wednesday evening. “If you are a student conduct administrator at a major university, particularly one like Stanford, you should be able to understand that your role can have a chilling effect. If you get something like this come across your desk, this is a chance to educate the person who is complaining and to say, ‘Look, you have the right to complain to us, but we can't do anything about this.’”

While Steinbaugh understands the pressure Wallace must have felt during the days-long debacle—on top of stress balancing his last year of law school and preparation for taking the bar exam—he's glad he spoke up; this was an opportunity to teach others about their First Amendment rights and draw scrutiny to often overly cautious actions on university campuses regarding controversy and conflict, especially when censorship efforts happen across the ideological spectrum.

“It can be hard to rock the boat when you're already being punished for doing something that was perceived as rocking the boat," Steinbaugh said. “Satire is not defamatory; it is intentionally false speech that people understand to be false. Nobody thinks that Senator Hawley on the morning that he was in Washington DC was also appearing before the Stanford Federalist Society to tell them how to riot.”