Are robots coming for California’s jobs?

In today’s increasingly automated economy, that’s certainly the fear. Technology has always generated economic churn, destroying some jobs and creating others. Already advances have generated a whole new sector of “gig” employment, and deeply disrupted other workplaces, from brick-and-mortar bookstores to newspapers to travel agencies.

Over the next decade, jobs mostly held by the working poor appear to be most at risk of displacement: food services, manufacturing, transportation and warehousing, agriculture and retail. The least likely to be automated by 2030? Professional, management and educational services, and jobs in health care and social assistance.

State leaders fear that, if something isn’t done before the next wave of automation, what’s left will be “f-ing feudalism,” to borrow one politician’s expletive. Gov. Gavin Newsom wants to figure out how to make future jobs pay well. A key question his Future of Work Commission is asking: What role should organized labor have?

How is the workforce changing?

California has a workforce of 19.4 million people helping to power a $3 trillion economy. In the last 15 years, however, that workforce has experienced dramatic shifts, notably with employment growth in high-skill and low-skill jobs.

The ranks of personal care and service workers have tripled from around 300,000 in 2004 to nearly 1 million this year, according to data from the state Employment Development Department. At the same time, the rise of Silicon Valley has generated a 60 percent increase in computer and mathematical occupations, putting more than 600,000 Californians—a population larger than the entire city of Denver—to work in the tech field.

Meanwhile, manufacturing and administrative support positions have been on the decline while health care, finance and managers have seen significant gains. 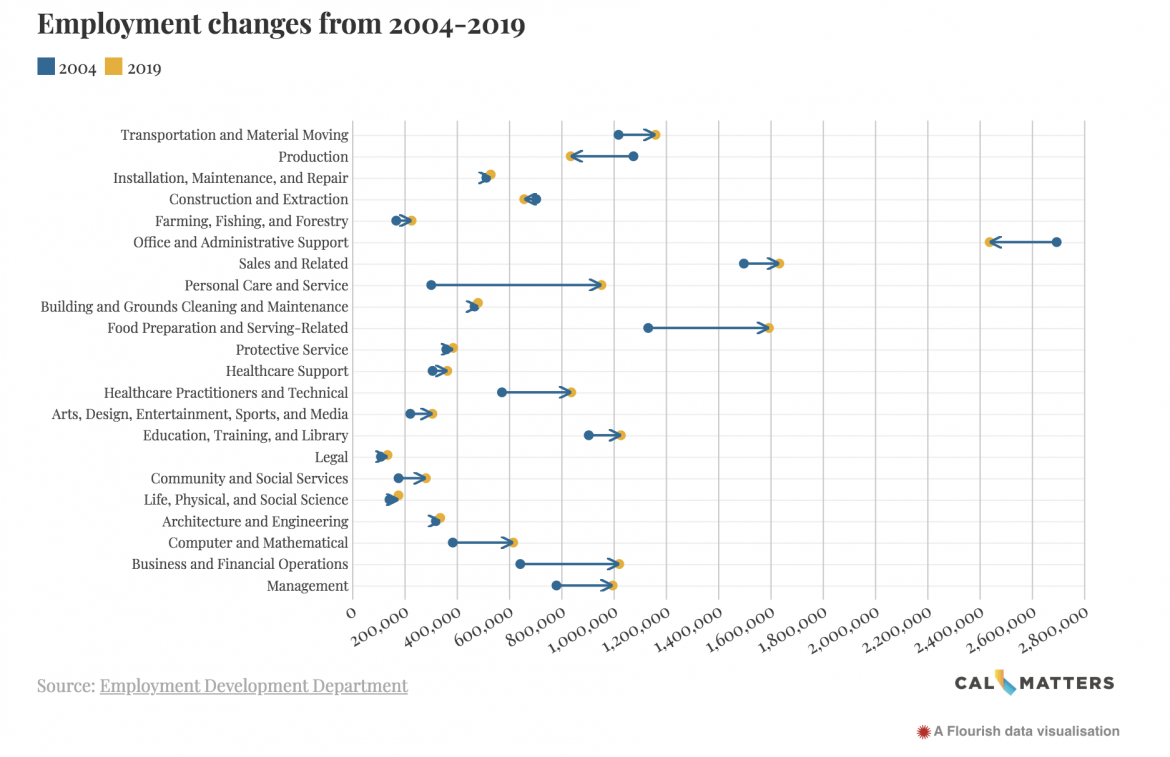 How much are workers being paid?

While everyone has seen wages rise over the last 15 years, pay increases have been uneven. Higher earners with high-skill jobs have gotten hefty raises, lower-paid workers not so much. 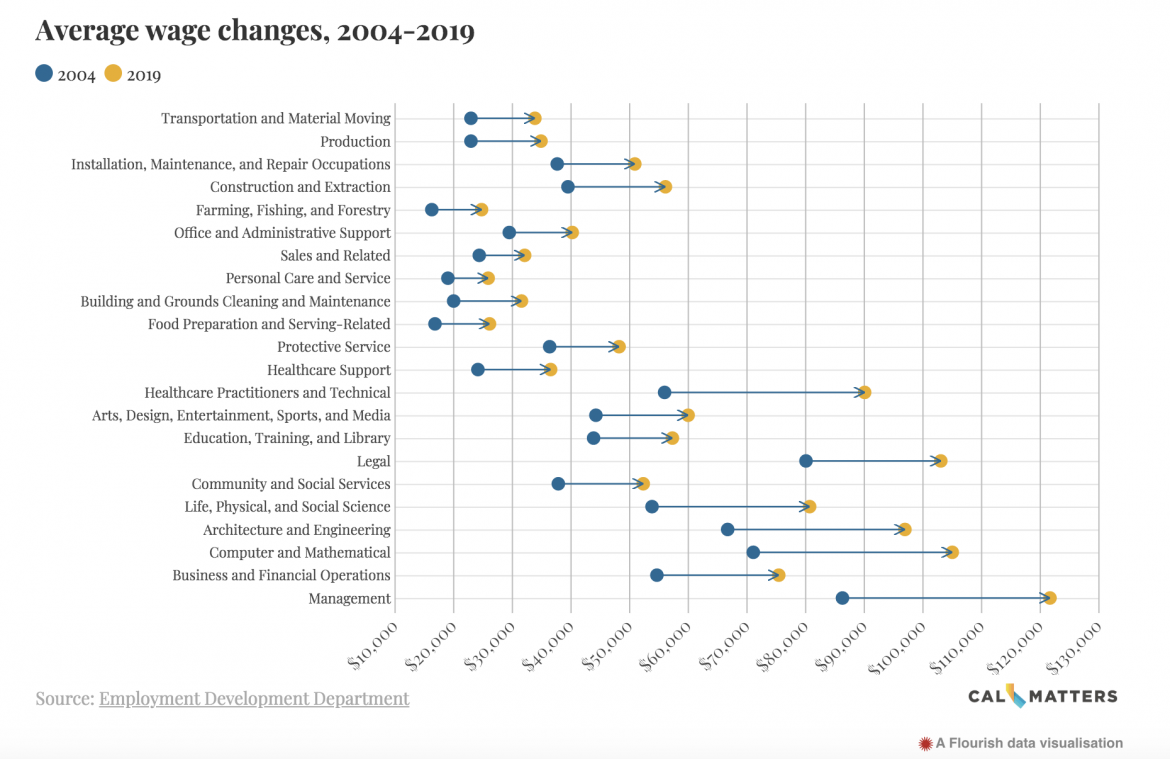 California’s unemployment rate is at record lows (3.9 percent in October) while the workforce is bigger than it’s ever been. Of the 19.4 million Californians currently looking for work or working, 18.6 million are on the job. In fact, the state’s productivity, meaning economic output per labor hour, is at record highs. According to the Bureau of Labor Statistics, California contributed more than any other state to America’s growth. The productivity rate grew 1.7 percent from 2007 to 2017. 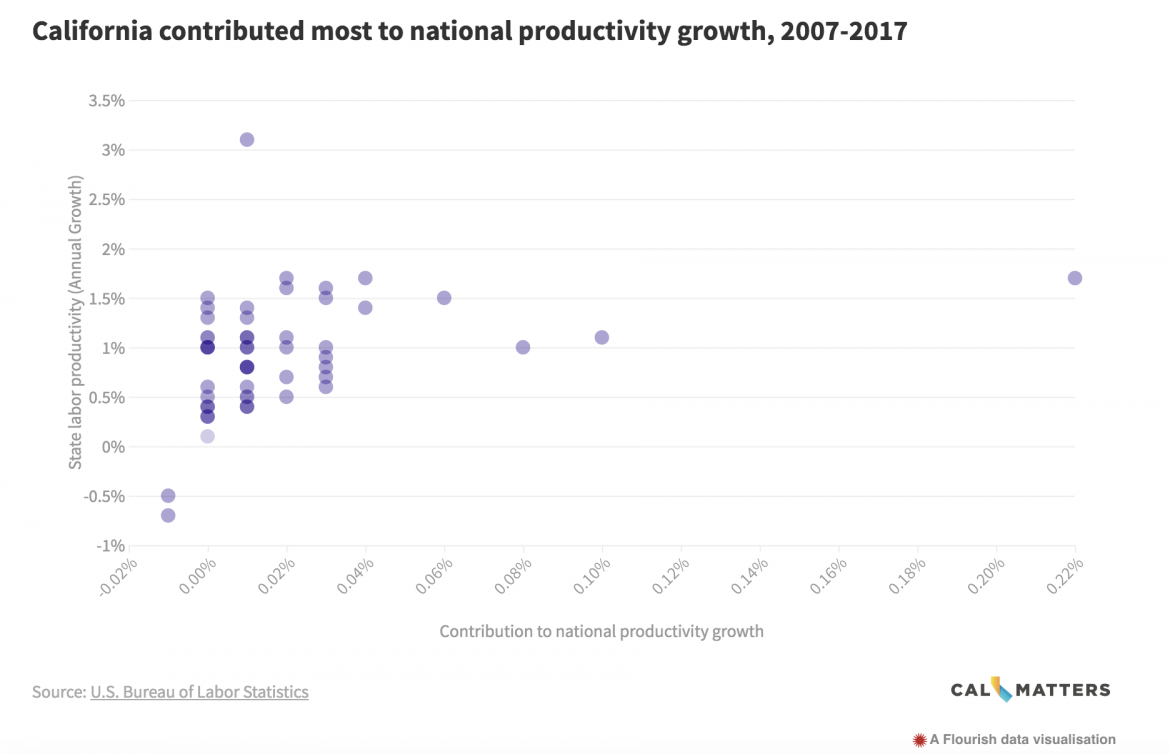 … so why aren’t paychecks rising at the same pace?

As productivity has increased, the economic gain for workers hasn’t kept up with the value their output has added to the economy. In other words, workers aren’t sharing the wealth proportionately. In most states, including California, labor productivity is increasing faster than wages, which means workers are losing ground in many places.

In fact, 32 states between 2007 and 2017 saw the average annual percentage change in the productivity-compensation gap fall into negative territory. California is among the states with the highest gap.

Why is pay a problem?

While the middle class shrinks, the ranks of the working poor are expanding. Today, one-third of working Californians make less than $15 an hour. This has contributed to the racial wealth gap because the jobs most at risk of automation are disproportionately held by workers who are Hispanic and African American. 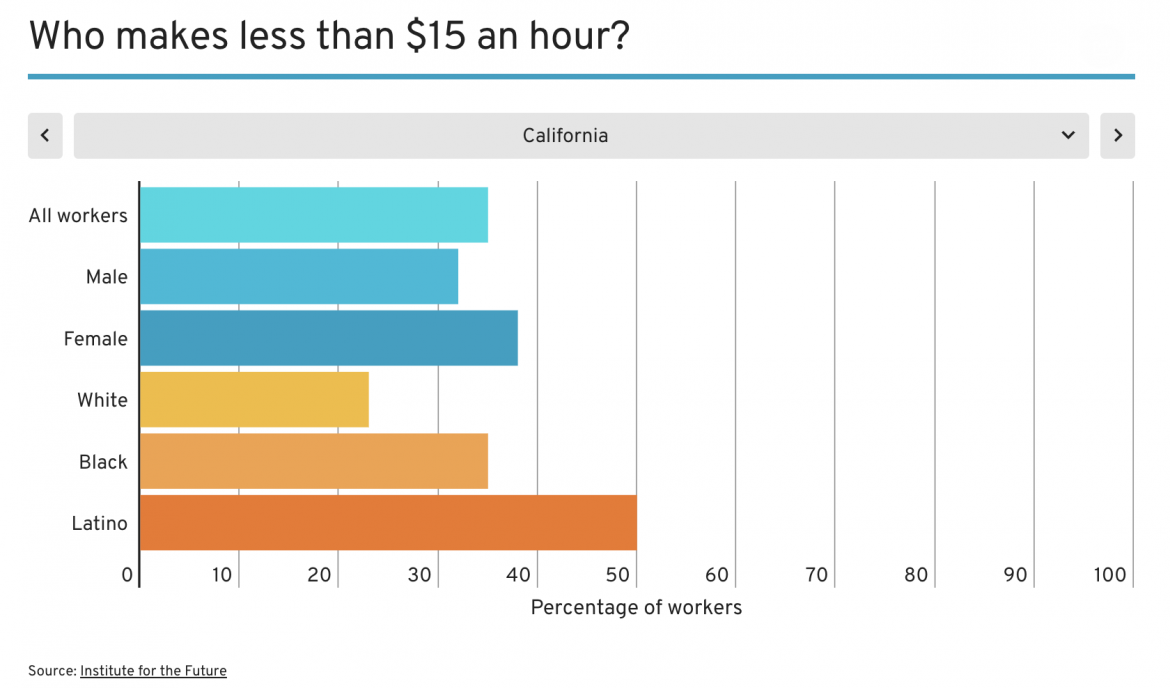 Should I worry about robots?

Nearly two out of three adults think automation and artificial intelligence will put jobs at risk. Some are right to be afraid. For others, the robot threat is debatable.

For instance, many experts expect self-driving trucks to roll autonomously on the highway, but they also predict drivers will still be needed to navigate local streets, where challenges can be more unexpected. According to a report from Working Partnership USA and the UC Berkeley Labor Center, the growth of online purchases and decline in freight costs could create more driving jobs than the number lost to automation.

What we do know is that automation is good at eliminating repetitive tasks. Think of how the washing machine revolutionized domestic work. It’s likely routine jobs, which are often low-wage, low-skill positions, will be more susceptible to robots.

And California’s 10 largest occupations are topped by low-wage jobs, from personal care aides and retail staff and cashiers to food service workers and laborers. Most of these jobs are too difficult for robots, but it’s likely some can be automated to a degree. Take, for instance, ordering kiosks at McDonald’s or self-check out lanes at Safeway.

What are the jobs of the future?

Think supply and demand. The foundation of our economy is evolving from manufacturing to service, for instance. That means an ongoing need for health care, social assistance, and professional, management and educational services.

Within a decade, one out of every five state residents will be seniors. Those aging Californians will require support—mostly from human caretakers. It’s why home health aides, personal care aides and nurse practitioners are among the top five fastest-growing occupations in California.

Other health and medical professions also will experience growth.

Demand, however, will begin to change in other sectors, particularly routine jobs that are most susceptible to automation. These include food services, manufacturing, transportation and warehousing, agriculture and retail.

What should we teach?

The higher education system has to evolve with the changing workplace but, too often, it struggles to keep up. Not only do many of California’s public colleges suffer from low graduation rates, but they lack capacity to train workers in high-demand fields.

California State University, for example, is in the midst of a 10-year campaign to boost its four-year graduation rate from 19 percent to 40 percent. By comparison, the University of California’s undergraduate rate is nearly 68 percent.

And though the CSU is making strides to produce more graduates with science, technology, engineering and math degrees, applicants who qualified for basic nursing are being turned away at all 16 campuses that offer the program due to insufficient slots.

At the community college level, there are early efforts to help adults get retrained. Specifically, the state’s new online community college, Calbright, aims to prepare working adults for careers in the high-demand fields of cybersecurity, medical coding and information technology. Enrollment began in October.

What’s the risk in my city?

California has some of the areas with the highest and lowest exposure to disruption.

Since low-income, low-skill jobs are at greater risk of being automated, regions will be impacted differently. Cities with more low-wage jobs will suffer greater job loses.

Translation: You have a better chance of weathering the next 15 years if you live in San Francisco or San Jose, worse if you live in Riverside, San Bernardino, Merced or Modesto, according to Johannes Moenius, director of the Institute for Spatial Economic Analysis at the University of Redlands School of Business.

How about job training?

The business community is right to be concerned about a workforce skills gap, particularly as high school-aged students enter the workforce. The California Chamber of Commerce favors a method called Linked Learning, which integrates academics, career technical training and work-based learning.

More recently, the Newsom administration secured $37 million to fund apprenticeships in the green economy with a focus on disadvantaged communities.

In addition, the state provides training resources for job seekers through CalJobs, administered by the Employment Development Department. The web portal acts as a resource for people to find training and apprenticeships.

For decades, research shows, wage gains have been uneven, with most wealth accruing at the top of the pay scale. It’s not that there haven’t been jobs, it’s that those jobs don’t come with paychecks that keep up with the Golden State’s high cost of living. The result has been increased poverty (20 percent are working poor), homelessness (we’re No. 1) and lower-paid workers getting priced out of the state.

To counter that, California was the first state to approve $15 minimum wage, which will be fully phased in by 2023. Some employer groups opposed, saying raising labor costs will only accelerate automation in the workplace.

For example, after the City of Los Angeles passed an ordinance to increase the minimum wage to $15 an hour by 2020, the owner of an events rental business invested $150,000 in an industrial dishwasher to replace between six and eight people who had been earning $10 to $11 an hour washing dishes. 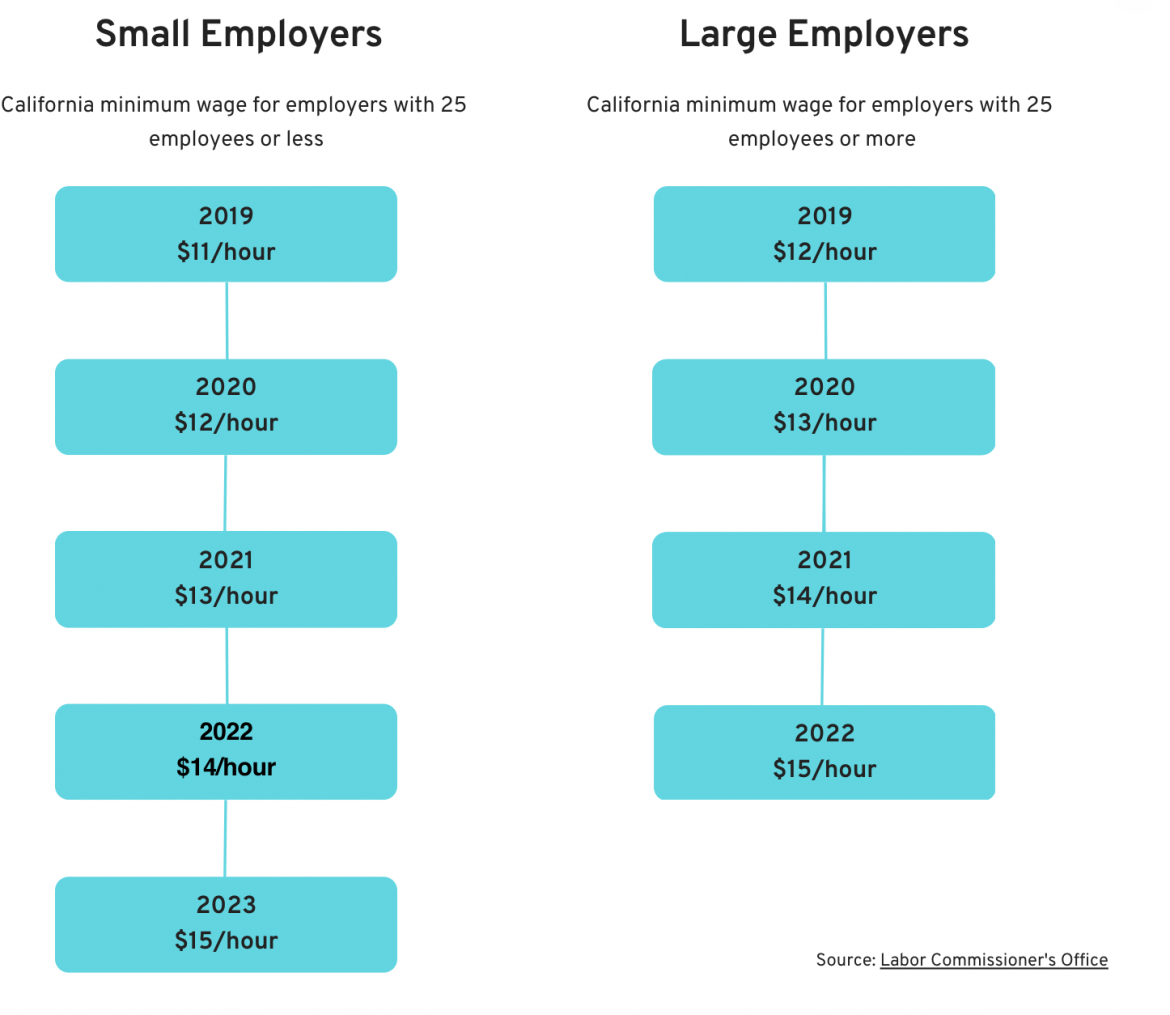 What are the tax incentives for workers?

Government can offer tax incentives to encourage people to stay on the job, even if their pay is modest. Earlier this year, Newsom increased funding for the state’s Earned Income Tax Credit to put money directly into working people’s pockets, expanding the program from $400 million to $1 billion per year.

The EITC now provides a $1,000 refund to working-poor families with children under 6 and expands income eligibility from $24,950 to $30,000, so people earning minimum wage won’t lose out on the credit when hourly pay rises to $15 in a few years. 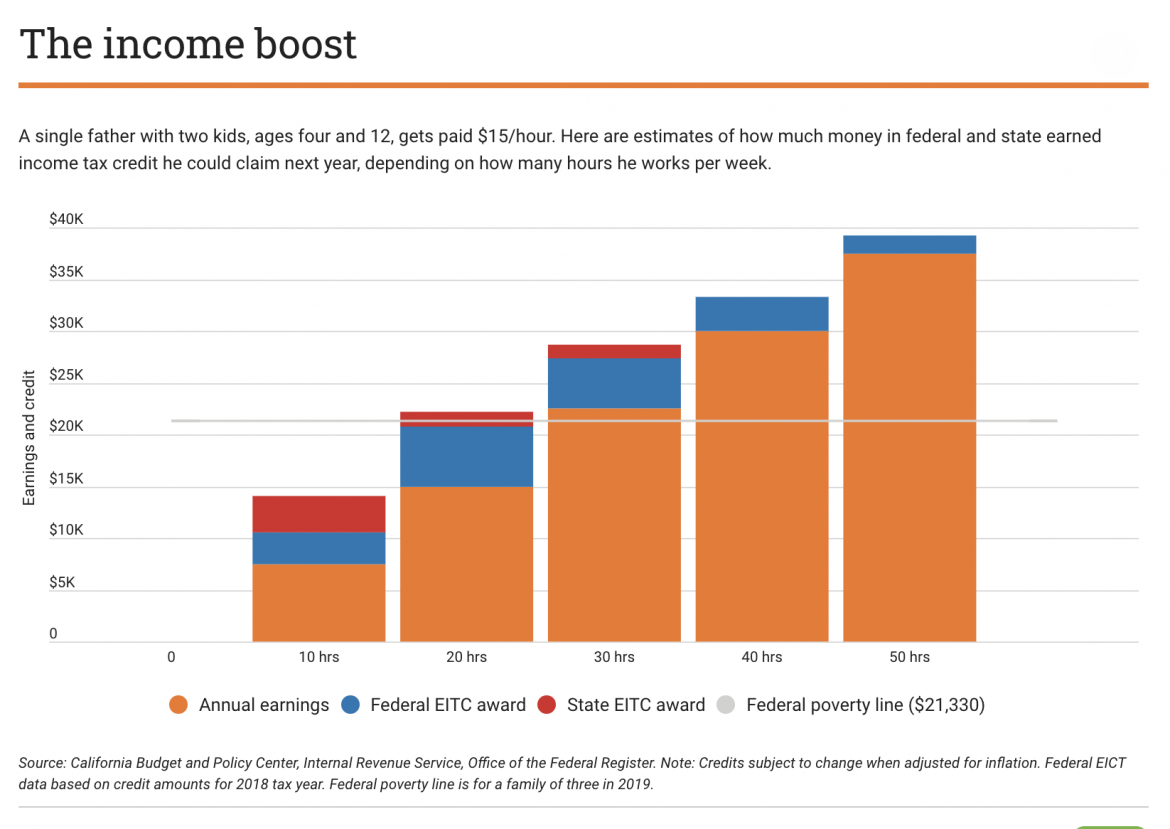 California Competes: An income tax credit to encourage more companies to do business in the state. The credits need to be negotiated with the Governor’s Office of Business and Economic Development, known as Go-Biz. Past reviews, however, showed some credits were not claimed. Aerospace typically wins big.

New Employment Credit: A tax credit that can be claimed directly by employers for hiring certain types of new workers.

What’s the experiment in Stockton?

One California city is testing out the idea of universal basic income, which provides low-income families with a monthly stipend with no strings attached. Supporters of the Stockton Economic Empowerment Demonstration say it’s a hand up for the working poor as low-wage, low-skill jobs get automated. But critics worry a handout will encourage bad behavior.

Are unions the answer?

Union membership has fallen to a historic low as a share of the state’s workforce. According to the Bureau of Labor Statistics, the unionization rate in California is 50 percent in the public sector, but just 8.3 percent in the private sector.

There are ongoing efforts to unionize new groups of workers such as home health aides and gig workers. Labor logged a successful year in 2019 in Sacramento and the Newsom administration believes unions are part of the solution.

“There’s data that shows that having a union does more to ensure higher wages than even having a college degree,” said Labor Secretary Julie Su, who has been leading the The Future of Work Commission alongside Chief Economic Advisor Lenny Mendonca and Senior Advisor of Higher Education Lande Ajose. 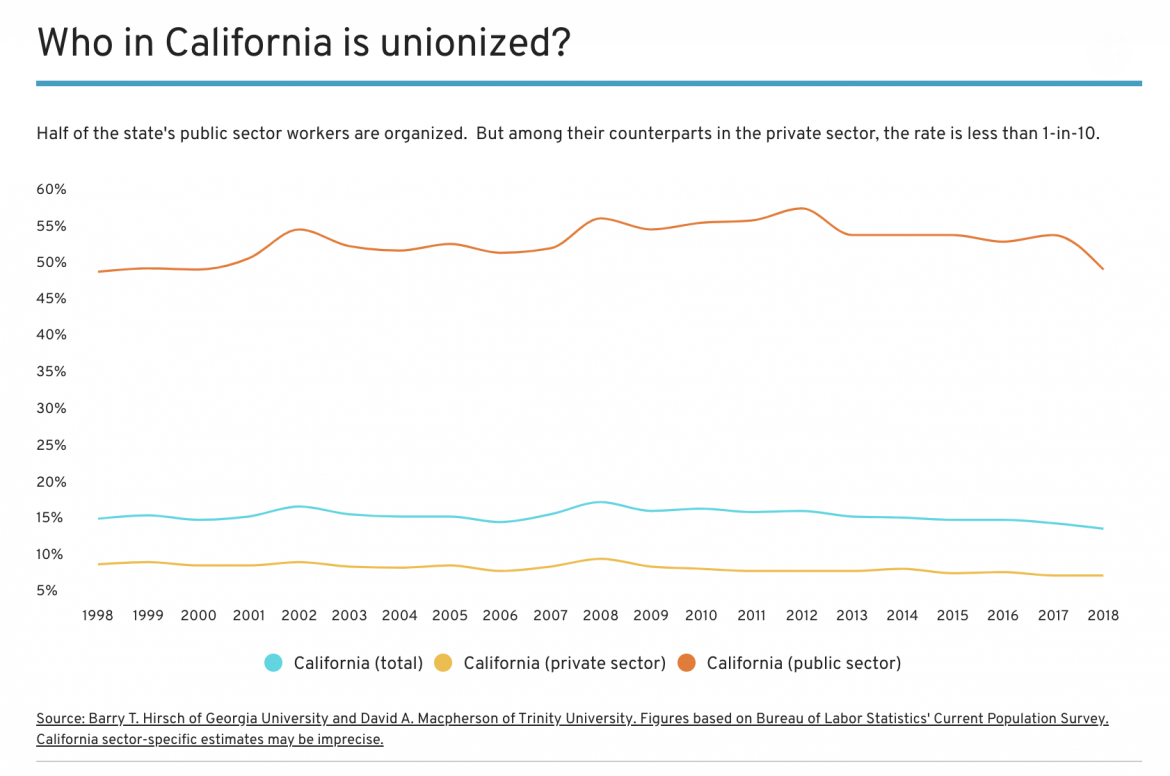 The future of the gig economy

Newsom wants to give workers, particularly the 200,000-plus rideshare drivers for Uber and Lyft, the right to organize a union. By allowing workers to bargain for better pay, benefits and working conditions, the Democratic governor believes unions will help close the state’s wage gap.

Employers are fighting back. Truck drivers have already sued. Industries as varied as news publishers and health care have lined up against what they say is a rewriting of rules that had been around for decades. Gig companies have pledged $100 million for a ballot initiative to keep drivers classified as freelancers.

There’s also criticism from some labor leaders. Robbie Hunter, president of the State Building and Construction Trades Council, which represents 450,000 construction workers, was disinvited from Newsom’s future of work commission after an apparent disagreement over a strategy Newsom views as a “third way” for classifying gig workers.

The building trades opposed such a compromise fearing online home service sites such as Handy.com would devalue plumbers, electricians, and other trades—middle-class jobs the union has built up over decades through apprenticeship programs and fighting for prevailing wages. Hunter’s dispute with Newsom is wide-ranging but here’s the irony: In tasking the Future of Work Commission to turn low-paying jobs into good-paying jobs, the governor has effectively shut out one of California’s most powerful advocates for middle-class workers in private-sector jobs.