Rep. Anna Eshoo (D-San Jose) joined more than 20 other members of Congress on a trip to the U.S.-Mexico border to visit immigration detention centers where thousands of children are being jailed and isolated from their families.

Two weeks ago, the group toured the Texas lockup lined with the infamous rows of cages that sparked public nationwide outrage after news photos of them went viral. The detention center reportedly holds more separated immigrant families than any other facility in the country. 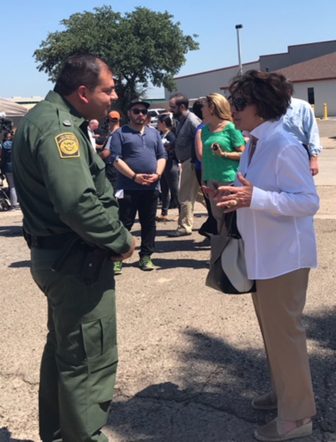 Eshoo said she was troubled by how ill-prepared the agencies are to deal with the influx of families—and especially children. At the U.S. Immigration and Customs Enforcement-run Port Isabel Detention Center in Los Fresnos, Texas, Eshoo spoke with detained mothers who were in the dark on whether they’ll be able to see their children again.

“The nation has risen and said we have zero tolerance for what we’ve just witnessed,” she told reporters after a walk-through.

Under the Trump Administration’s “zero tolerance” policy, which was finally lifted by executive order on June 20, thousands of people were arrested and isolated from their children while they await prosecution or an asylum hearing. Though Trump formally ended family separation, he did not indicate steps taken to handle the children who have already been separated.

Following her trip to the border, Eshoo wrote a letter to U.S. Department of Health and Human Services (HHS) Secretary Alex Axar asking about the children placed in the department’s case since the implementation of Trump’s zero-tolerance policy. In her letter, the congresswoman asked whether any of the separated children have been transported to or housed in the South Bay by the Office of Refugee Resettlement.

If any children are in the South Bay, Eshoo said, she would like to know where they are being housed and wants to make sure that those facilities undergo proper vetting to make sure they are suitable to care for children. She also urged the department to providing pro bono legal assistance for children to claim legal asylum or reunite with their parents.

“As the representative of California’s 18th Congressional District, I have an obligation to represent all my constituents, including separated children who may now be living there,” she wrote.

Eshoo’s office has yet to hear back from HHS about whether children are indeed being housed in the South Bay. It will be a few weeks if they even answer at all, her communications staff told San Jose Inside.

According to recent news reports, at least two young girls who were separated from their parents at the border were transported to a shelter in the East Bay, where the community has been protesting plans by the Trump administration to build an immigrant detention camp at the Concord Naval Weapons Station to hold up to 47,000 detainees.