A San Jose dad is paying $1,500 a month on a Willow Glen studio for his daughter’s two cats because they don’t get along with his new fiancée’s terrier.

The story of Maine Coon-and-Bombay-mix sisters Tina and Louise—named after a sibling duo in the animated sitcom Bob’s Burgers—getting a better deal on rent than most humans has gone viral since the Mercury News first reported it over the weekend, prompting mixed reactions.

Cat lovers gushed over the fatherly devotion of Troy Good, the apparently well-to-do businessman leasing the 400-square-foot “cat-chelor pad” for his daughter’s pets while she’s away at college. “That’s awesome!!” a user dida819 wrote on the cats’ Instagram account (because, of course they’re also budding IG stars). “Too many people get rid of their animals. Thankfully, you guys found a solution!!”

A USA Today headline deemed the cats “so extra, they have their own apartment.”

Others called the living arrangement “peak Silicon Valley,” “so Willow Glen,” and a stark reminder of the region’s vast wealth gap.

“While this story is funny,” Jennifer Loving, CEO of homeless advocacy nonprofit Destination Home, told the Merc, “it really does highlight the tremendous inequity in the Silicon Valley. We have thousands of people on our streets, and we’re paying to make sure that our cats have a place to live.”

Victoria Amith, the 18-year-old cat mom of Tina and Louise, announced on the kitties’ IG that they are no longer granting interview requests. 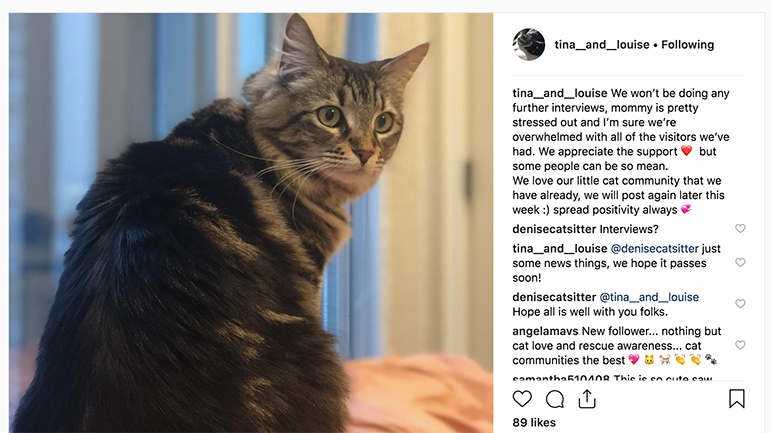