Designed by tattoo artist and illustrator Benny Arana-O’Hara, the mural painted on the asphalt of West Virginia Street depicts two fists coming together against a red line. 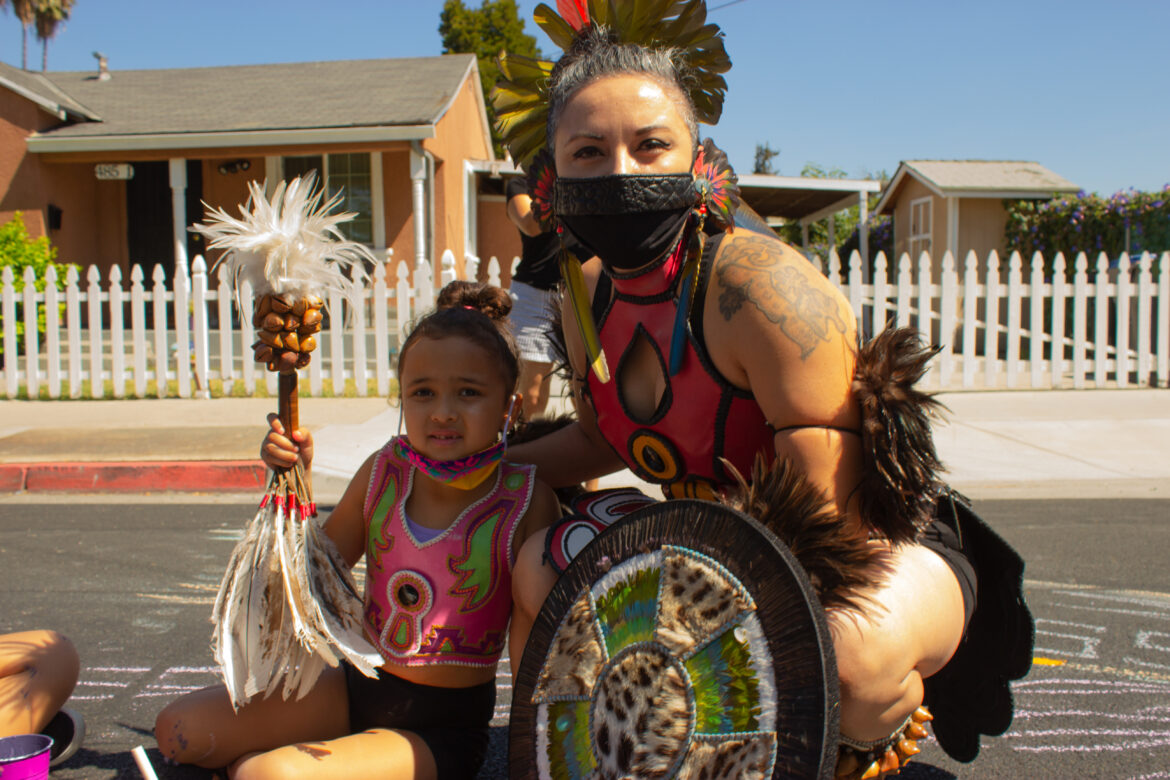 Some attendees dressed in Aztec clothing in homage to their indigenous heritage. (Photo by Amani Hamed)

Shaunn Cartwright, one of the organizers, said the fists colliding at the red line represent communities coming together to destroy institutional practices such as redlining that kept permanent affordable housing out of the reach of many unhoused people.

“It’s about the oppression and the injustice, but it’s also about the resilience and the strength of these communities,” O’Hara added.

Though O’Hara drew the final design, they said the creation of the mural was a group effort—one that was inspired by the Black Lives Matter mural by Backesto Park. 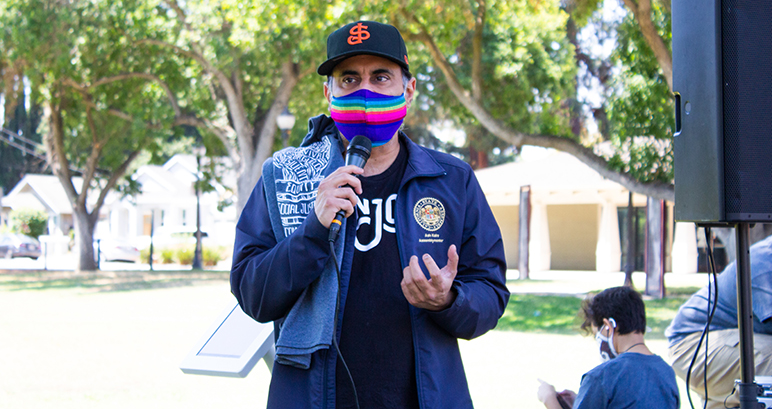 Assemblyman Ash Kalra (D-San Jose) was one of the speakers at the weekend event. (Photo by Amani Hamed)

Organizers said the new Virginia Street mural is also meant to draw the link between homelessness and racism. In San Jose, where Black people comprise just 3 percent of all residents, they make up 20 percent of the unhoused population, according to the latest homeless census, which was conducted in early 2019. Latinx people, meanwhile, make up 32 percent of the city population but 41 percent of its unhoused community. 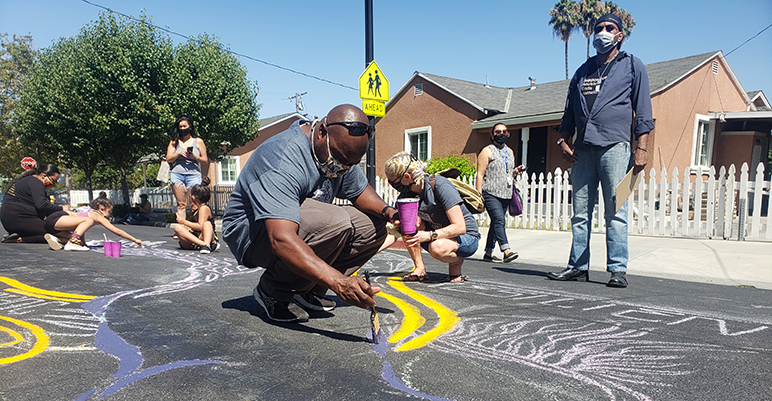 The painting took from dawn to dusk to finish. (Photo by Jennifer Wadsworth)

The same collaborative spirit that brought together the mural wove through other aspects of the event which, like the painting, were designed to bring attention to the many systemic failings that cause homelessness.

While some volunteers painted the street, others sold T-shirts with proceeds benefiting the unhoused community. While members of the nonprofit HERO Tent handed out snacks and whipped up a pancake breakfast for attendees, other organizers collected canned goods and bottled water for unhoused folks.

A couple hours into the event, speakers—from local council candidates to state electeds—took to a microphone to talk about the need to protect and expand voting rights, the dangers of gentrification and permanent solutions to homelessness.

District 27 Assemblyman Ash Kalra lamented the income inequality that’s worsening in the pandemic as “a tale of two valleys,” in which the wealthy live in relative comfort while essential workers are treated as “sacrificial,” so that others might stay home.

The speakers discussed how the pandemic has compounded the city’s homelessness crisis, as many residents were forced to file for unemployment as some businesses shut down and essential services such as grocery stores and restaurants operated with reduced staff. They spoke about how federal COVID-19 benefits ended last week, which sets the stage for millions of Americans to lose their homes. 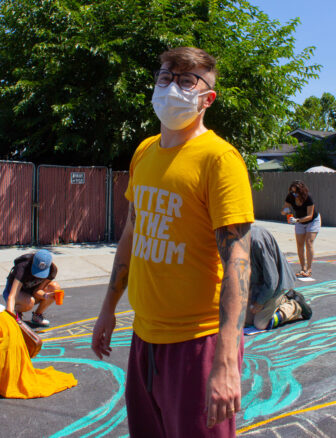 Benny O'Hara was the lead designer for the vibrant mural. (Photo by Amani Hamed)

Organizers chose the site for the mural because of the neighborhood’s Latino heritage and the resilience of Latinx residents in San Jose’s Horseshoe-Gardner area.

Peter Ortiz, board member of the Santa Clara County Board of Education, spoke on the gentrification of neighborhoods such as Gardner and how the erasure of Latinx people in San Jose relates to the disproportionate rate at which people of color become homeless.

“They want to call this ‘North Willow Glen,’ but this is not Willow Glen,” he said. “This is Gardner. This is Horseshoe. There is no San Jose without the Latinx community.”

Black and Latinx Americans are also more likely to be essential workers, and represent a disproportionate amount of those who contract and die from COVID-19, he noted.

Activist and longtime Gardner resident Patricia Palomares-Mason took the microphone to address the particular barriers to housing facing the Latinx community in San Jose, and to explain that while she can sometimes come across as aggressive when acting as a community advocate, she has no intention of stopping.

“I’ve thrown the chancla at some people before, because I’m defending my gente,” Palomares-Mason said. “From the north and south, east and west, as high as the sun and right down to Mother Earth,  as long as I’m alive I’m gonna do it.” 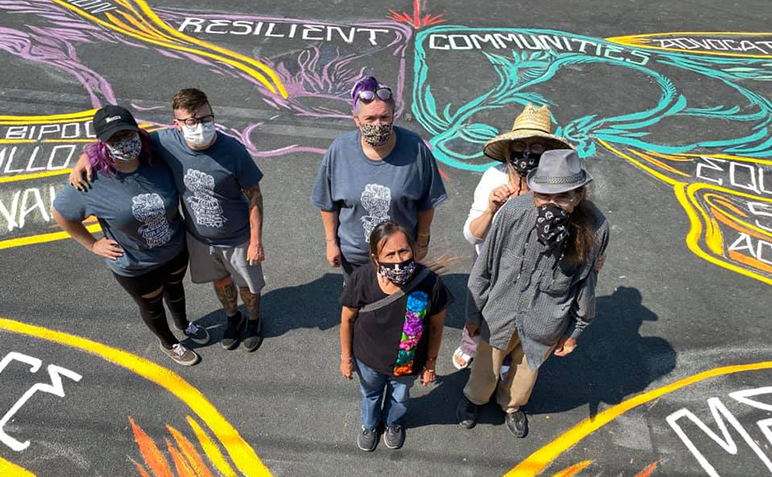