Williams has been under fire since city auditors caught him spending taxpayer money on his personal legal expenses. According to records obtained by San Jose Inside, he spent $37,000 on Ad Astra Law Firm to send a cease-and-desist letter accusing Mayor Rich Tran of harassment, age discrimination and defamation. The letter also threatened to sue and demanded more than $1 million in damages.

When reporters asked for records pertaining to the brewing legal conflict, Williams sued to block their release. San Jose Inside obtained a copy of the cease-and-desist letter before the April 28 court hearing, however, and published the document before a judge granted a temporary restraining order to keep it and other records under wraps.

Apparently, Williams tried to get Milpitas to pay for the lawsuit he filed against the city.

Diaz subsequently warned him about the consequences of spending public money for private purposes. Those kinds of unauthorized expenditures violate city policy and state law, Diaz cautioned in a letter to the council, putting Williams at risk of losing his job and facing criminal prosecution.

Williams has repeatedly denied wrongdoing, but he did not deny that he spent the money. In memo released to San Jose Inside through a formal records request, Williams said he retained Ad Astra Law Group to investigate multiple complaints against Tran.

“In light of initial findings and recent turn of events, I am reimbursing the City of Milpitas the initial $7,000 payment to avoid any potential alleged conflict of interest,” Williams wrote in a May 8 memo. 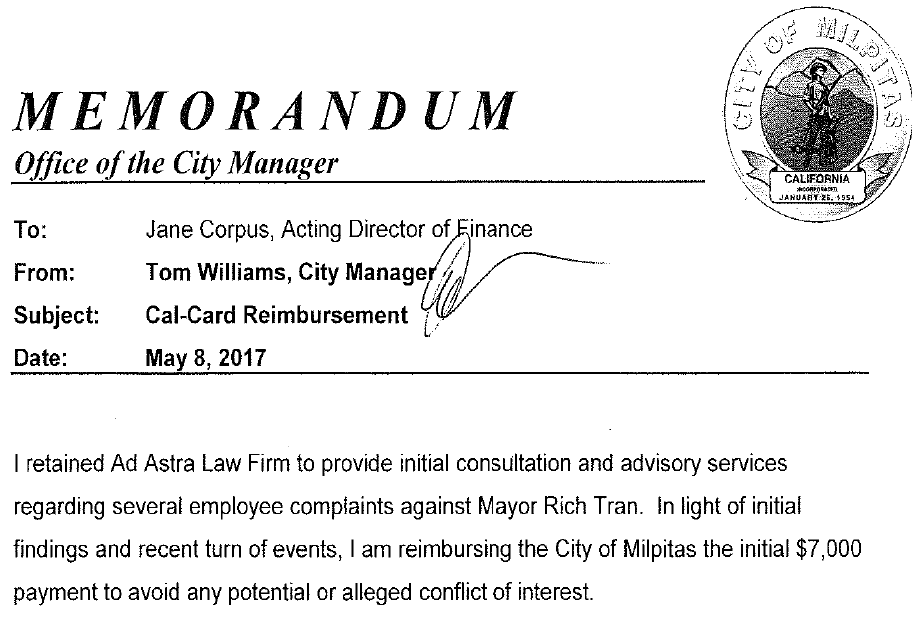 No mention was made of the additional $30,000 he requested, which records show was approved by his executive assistant, Rachelle Currie, on April 28. It’s possible that the $30,000 payment was approved, but never fully processed.

Prosecutor John Chase, of the Santa Clara County’s District Attorney’s Office, told San Jose Inside that it the Public Integrity Unit is monitoring the situation in Milpitas. Meanwhile, the city’s outside auditing firm has deemed the city “high risk” because of the city manager’s financial misappropriation.

Williams, who was promoted to city manager in 2006, has been linked to several pricy lawsuits. The city has had to pay millions of dollars to settle claims of harassment, retaliation and age discrimination by former department heads and employees.

Tran, the city’s 32-year-old mayor, was elected last fall after promising throughout his campaign to put Williams under the microscope. The mayor’s vocal criticism of Williams has frequently placed him at odds with the city manager and his allies.

His attorney, Claire Cochran, filed a public records request for all correspondence between Tran and reporters. Williams’ personal friend, Joseph Weinstein, also submitted a request for all complaints filed against Tran and the rest of the council.