In an interview nine days before his death on the front lines fighting ISIS, Robert Grodt discussed how most Americans know nothing about the Kurdish struggle for autonomy.

“You don’t see Kurdistan on the globe anywhere,” the 28-year-old Mountain View native said. “It doesn’t show up.”

The only reason Grodt’s family knows about it, he continued, is because he enlisted earlier this year in the YPG—a Kurdish initialism for the People’s Protection Units, a U.S.-backed force battling the Islamic State in Syria.

On July 5, Grodt, who went by the Kurdish nom-de-guerre Demhat Goldman, lost his life in a firefight on the outskirts of Raqqa. Within a week, the name of the lifelong humanitarian became widely known. Stories about his death called attention to the cause that drew him halfway across the world.

“If he wanted to teach us about all this stuff, I wish he could have gone about it another way,” says one of his sisters, Stephanie Eason. “But I know my brother did good in the world. I know he touched lives—he touched mine—and he would always defend the oppressed. Even in his death, he’s teaching us about the struggle he believed in.”

Grodt, who was born in Mountain View but spent most of his childhood with his five siblings in Simi Valley, came of age as an activist in the Bay Area. After high school, he campaigned for the American Civil Liberties Union and Amnesty International. He also volunteered in Santa Cruz for Grassroots Campaigns, promoting LGBTQ equality and global human rights.

“Even back in 2009, he was talking about the YPG, about how it inspired him and how it was a cause that he believed in,” says Alysa Cisneros, who lived with Grodt in San Jose and worked with him on social justice campaigns in Santa Cruz at the time. “He was an idealist, who has always stood for autonomy and anti-fascism, for liberation of people who have been oppressed. He always looked to that north star.”

That conviction led Grodt in 2011 to hitchhike across the country to join the first Occupy Wall Street camp in Zuccotti Park as a volunteer medic. That’s where he met his partner, teacher’s aide and fellow protester Kaylee Dedrick. When cops pepper-sprayed her in the face, Grodt rushed to help her. Video of the incident went viral, turning her into a symbol of the movement.

The pair fell in love.

“Nothing strengthens a relationship like a chemical agent,” Grodt quipped to New York City reporters at the time.

The next year, they gave birth to Tegan, who became a symbol in her own right. Tabloids dubbed her the “First Occubaby.”

“He loved his daughter so much,” Dedrick tells San Jose Inside. 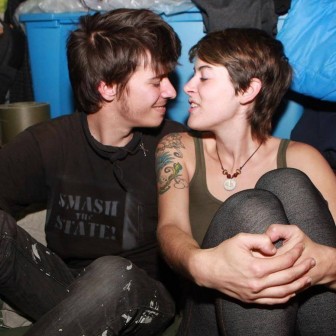 Grodt and Dedrick during the 2011 Occupy protests in NYC. (Photo via GoFundMe)

Corey Mynatt, who had known Grodt since kindergarten, says he loved hearing his best friend talk about fatherhood in recent years.

“I remember him being fascinated by Tegan becoming this little person,” Mynatt says. “He started seeing himself in her, and seeing Kaylee in her. It was really exciting for him.”

When Grodt spoke to Dedrick about going to Rojava, one of two Kurdish front lines in the war against ISIS, there was no reasoning with him.

“I knew he was going at that point,” Dedrick says. “He set his mind to it, he was going to help out. It was a hard choice for him to make.”

“I think he was trying to protect us from the dangers of what he knew he was getting into,” she says. “When I found out, I was like, ‘Are you kidding me? Like, can’t you go clean beaches or help the world closer to home or a little bit safer than Syria?’ But he told me, ‘I have to fight for these people, they need our help.’”

Serving the Kurds, for Grodt, didn’t just mean picking up a rifle, Eason says. He went to build, weld, teach and develop bonds with people.

“He just wanted that humanitarian connection with everybody,” she says. “It’s a compassion that he had for the people and their cause and what he wanted to see in the world, not just in Syria. I am incredibly proud of him.”

To honor Grodt’s legacy, his family says, they will continue to share his story and advocate for the causes he died fighting for in Syria.

“Pick up a book,” Dedrick says. “Read about Kurdistan, about the YPG, about the wars that have been going on for so long. Google ‘Kurdistan.’ Start from there, and open your mind to a struggle that you may not have even known existed.”

A childhood friend of Grodt’s set up a GoFundMe account to raise money for Dedrick and Tegan. As of Friday, people had donated nearly $6,300. A memorial service has been set for Aug. 5 in Simi Valley.