To a degree perhaps not before seen in modern history, the Covid-19 pandemic is revealing a lot of people and institutions for what they really are, good and bad.

Cold, hard reality has a way of doing that. You can’t argue with a deadly virus like you might argue with an ideological opponent. So if your wacky, politically driven beliefs about Covid-19 are deficient, the virus—just by existing—will fully expose them as such.

Witness how Covid-19 proved wrong President Donald Trump’s claim that it would vanish in the warm weather “like magic” before Easter, (or that his administration “inherited” a “broken” test for the new virus from the Obama Administration, or that “anybody that needs a test gets a test.”)

Similarly, if you are a mercenary trying to profit from fear, the virus will highlight your real motives. Whether that does any good—whether anyone is convinced to stop believing the nonsense peddled by hucksters and loons after the harsh light of reality has been shined upon it—is unknown.

The cannabis business, while populated largely by serious, well-intentioned people, has more than its share of crazies and mercenaries. And they can be particularly insufferable and toxic. Go take a look at just about any Internet forum devoted to cannabis, and you will find people trading in all kinds of conspiracy theories and making all kinds of wild claims both for and against cannabis. “It will cure cancer!” “It will give you cancer!”

Predictably, given the state of civilization, some pot advocates and peddlers of elixirs now declare that their products can alleviate the symptoms of Covid-19, or even cure it.

The problem is so widespread that the Washington Post was moved earlier this month to publish a warning in the form of an op-ed written by David A. Guba Jr., a history teacher in Baltimore who has written about cannabis. The headline: “No, cannabis is not a miracle cure for covid-19.”

It’s disheartening that such a message needs to be delivered to a mass audience, but the fact is that there is so much chicanery in the cannabis business that it’s now joining with “essential oils” and other quack cures as major presence in multi-level marketing schemes and in the skeevier precincts of online marketing (email spam, Facebook ads).

That’s bad not only because people are getting ripped off and misled, possibly in dangerous ways, but also because CBD and some essential oils are also legitimate products with valid uses. No one is as critical of the quacks than the marketers of legitimate products sold for legitimate uses.

As with lunatic politics, the charlatanism is possible only because there’s a sizable audience for it. Hence the sub-headline on Guba’s op-ed: “It didn’t cure plague or cholera in the 19th century, either.” 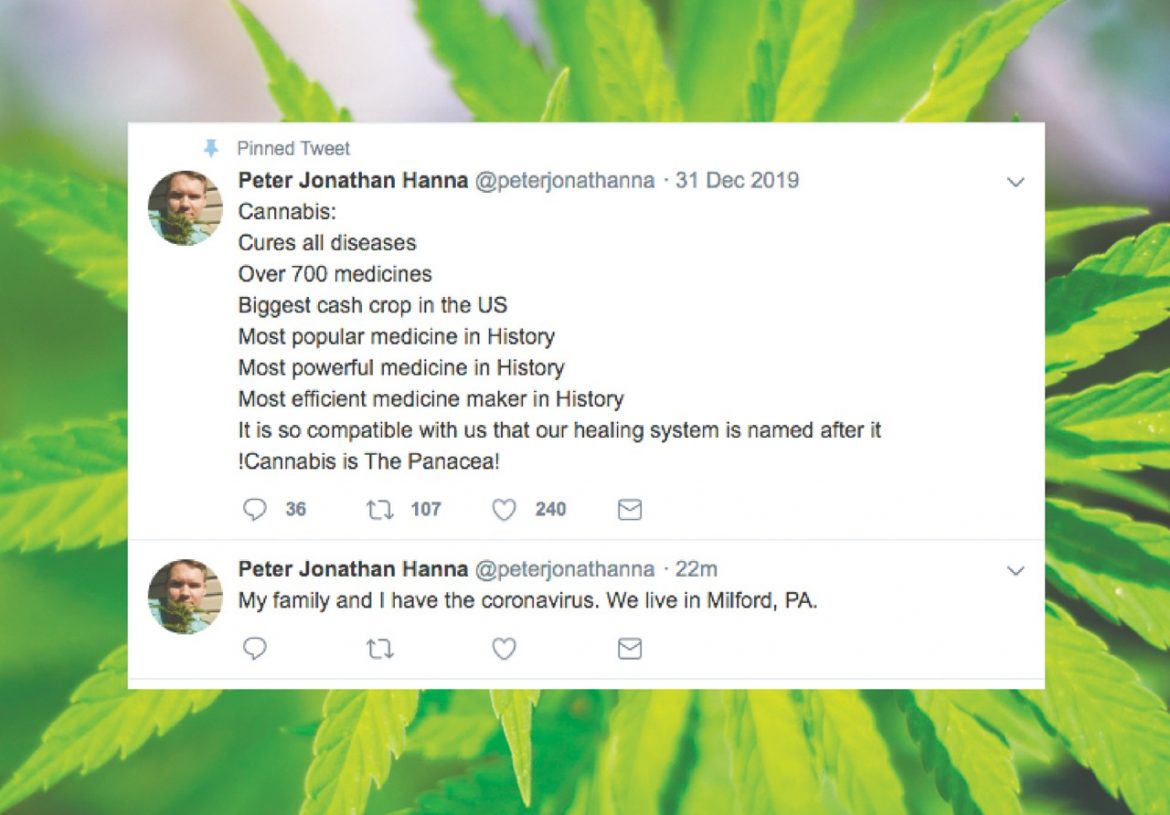 That cannabis has cured plagues is the kind of claim made by the loudest cannabis advocates on the internet, but as Guba notes, such people have been around for centuries. The modern version are the kinds of people who say they know for sure that the government is growing superweed on secret farms and selling it to finance CIA black ops, or that George Washington and Thomas Jefferson relaxed with big bowls of pot on the verandas of their plantations after a hard day of forging a new democracy. (While both men farmed hemp, there is no evidence that they ever smoked marijuana).

Peter Jonathan Hanna has more than 8,000 followers on Twitter. In his pinned tweet, he declares that “Cannabis cures all diseases” and that it is “the most powerful medicine in history.” Perhaps he’s never heard of penicillin—or perhaps he thinks it was a fake cure invented by the wicked masterminds of the pharmaceutical industry.

“The same people making sure the disease spreads are the same people pushing big pharma harmful vaccines to fight the coronavirus,” Hanna tweeted on March 27. “Follow the money for sure.”

On March 31, Hanna, who is selling a book full of his thoughts about cannabis, proudly pointed to a High Times article that mentioned the “Coronavirus cannabis prepper kit” he was promoting on YouTube. The kit includes weed, food, and a semi-automatic rifle. Hanna, who indicates in his bio that he believes in far-right the QAnon conspiracy theory, also is a member of the World Peace and Unification Sanctuary, an offshoot of the Unification Church.

But Sanctuary is even weirder than the Moonies. The sect once held a mass marriage ceremony where participants were asked to hold AR-15 rifles during the proceedings. The group’s leader, Hyung Jin Moon (the son of Sun Myung Moon, who led the Moonies) has referred to guns as representing the “rod of iron” referred to in the bible. Scholars agree with the Bible’s obvious context: that the “rod of iron” represents the word of God, and not the favorite weapon of mass shooters in 21st century North America.

On March 13, Hanna tweeted: “My family and I have the coronavirus.” When it was new, that tweet appeared just under his pinned tweet about how cannabis “cures all diseases.” So, did it cure his and his family’s? That’s not clear. In a subsequent tweet on March 16, he said he was “99 percent sure” they had the virus, and he posted a video on YouTube where he asked viewers to weigh in on the question. He hasn’t mentioned it since, at least on Twitter, and he didn’t respond to a message seeking comment.

If somebody with 8,000 followers can be said to be fringe, the same can’t be said of former NFL player Kyle Turley, who has more than 48,000. Turley played offensive tackle for the New Orleans Saints, the Kansas City Chiefs, and the St. Louis Rams up to 2007. He began using medical cannabis to address lingering pain from game injuries and to combat “bouts of depression and rage,” as the Los Angeles Times put it.

In mid-March, just as it became clear the pandemic would be severe, Turley started promoting a CBD product online. “@NeuroXPF CANNABINOIDS CAN HELP BOOST YOUR IMMUNE SYSTEM AND WIN THE WAR AGAINST #COVID19 ask @drsanjaygupta,” he tweeted on March 19, pasting in an ad promising that the CBD oil would “Boost Your Immune System” and “Crush Corona.”

Turley is or was an owner of NeuroXPF, the company that makes the oil. He also is or was an owner of a cannabis dispensary in Moreno Valley, in Riverside County. After getting a warning letter from the Federal Trade Commission, which has taken a hard line on companies selling supposed Covid-19 remedies, he claimed he had relinquished his stakes in those businesses, which has not been independently confirmed. He said selling off his ownership has freed him to speak as a “private citizen.”

And speak, or rather yell, he has. “CANNABIS WILL PREVENT & CURE COVID19!!!!!!!.....commence the hate,” he tweeted on March 29. There is some research indicating that CBD and other cannabinoids can have calming effects, but much remains unknown about how that might work, whether it works similarly for everyone, and whether it’s effective for every kind of emotional or behavioral malady.

Meanwhile, though it’s possible that some cannabis components might be anti-viral agents, there is nothing like proof of it, much less any evidence that anything in the plant might be effective against Covid-19, a virus that has only been spreading among the human population for a matter of months.

Nonetheless, the people making these claims point to this preliminary research as “proof” that cannabis will cure the virus.

After having name-dropped Dr. Sanjay Gupta, one of the few TV-famous doctors who offer sound medical advice, Turley started yelling at him in all-caps, too, for not pushing cannabis as a treatment or cure for Covid-19. Gupta has in recent years become a careful advocate of medical cannabis, promoting it as a palliative for things like pain and seizure disorders only when there’s evidence for the claims.

There are many, many more examples of people with large followings promoting pot as a cure for the virus. Filmmaker and outspoken Hindu nationalist Vivek Ranjan Agnihotri tweeted that “Cannabis is a magic plant.” The tweet was accompanied by a picture of what looked like a still from a news show reporting that “Weed Kills Corona Virus.” When it was pointed out to that the picture was a fake created on a meme site, he refused to back down. Agnihotri has 313,000 Twitter followers.

Not surprisingly, some pot advocates have signed on with American conservative leaders’ general take on the pandemic: that it’s no big deal and we need to “get back to work.”

Marc Emery is a Canadian pot advocate, entrepreneur, and would-be politician who has been arrested multiple times and accused of sexual harassment. The self-described “prince of pot” is also a self-described libertarian, and like others of his ilk, believes that the fact that people die from other causes means that dying from Covid-19 doesn’t really mean much. Citing the relatively small number of Covid deaths in Ontario, he tweeted the observation that “99.9% of Ontarions are not in danger of dying nor will they.”

All of these people are reliably confronted with the sub-bulletproofness of their logic, but as with hyper-ideologues of all political stripes, it just doesn’t take.

“There is absolutely no proof or substantiated science indicating that somehow either cannabis or hemp cure or mitigate Covid-19,” pot lawyer Hilary Bricken wrote on her firm’s blog. Businesses and consumers “need to be on the lookout for snake-oil cures and/or curative claims being shamelessly pedaled across the cannabis and hemp industries during this volatile time.”

Prohibitionists are also making crazy claims. When the Drug Policy Alliance promoted an online festival, the proceeds of which would be directed to Covid-19 relief, Kevin Sabet, founder and president of the anti-cannabis group tweeted: “We’re trying to stop people dying, and you’re encouraging behavior that makes COVID-19 worse.”

Asked by multiple people how an online festival could make the virus worse, Sabet asked whether the event was “going to have anyone online using drugs” and whether it would “have messages promoting drug use.”

The people making this claim have more of a leg to stand on than do the cure-promoting quacks, but just a bit. Many doctors warn that smoking or vaping could make Covid symptoms worse and make it harder for the lungs to fight off the disease, although new research from France shows that a strikingly low number of smokers have gotten sick from the virus. In any case, the legit cannabis industry as a whole, including the Drug Policy Alliance, has repeatedly warned about the potential risks from smoking, and also warned pot users not to share smoking or vaping devices. Most have suggested using edibles until the pandemic has passed.

The people pushing these ideas seem immune to reason.

On Monday, Hanna sent out a request for expert opinion to help him solve a big problem: “How many grams of decarboxylated CBD hemp flowers,” he asked, “does my mom need to eat to cure her Alzheimer’s?”