The California Department of Food and Agriculture and the U.S.  Department of Agriculture announced today they are immediately beginning “an extensive survey and eradication project in response to the detection of the two insects on June 22 and June 23 a mile and a half apart in the City of San José.”
The state will use the same safe method that successfully treated a similar Oriental Fruit Fly infestation in Saratoga in 2019 and in Morgan Hill in 2020. The treatment has no community impact, officials said. 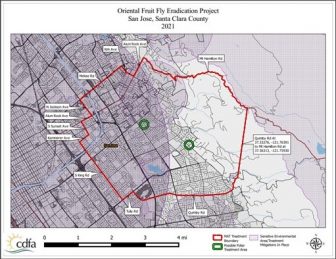 amage occurs when the female lays eggs inside the fruit. The eggs hatch into maggots, which tunnel through the flesh of the fruit, making it unfit for consumption. If a mated female, eight or more adult flies, or any larvae are detected, the state warned it will declare a quarantine that could affect growers and shippers in the surrounding area.

“Fruit flies can be extremely destructive to our robust agriculture economy in Santa Clara County, as well as harmful to community and backyard gardens,” said County of Santa Clara Agricultural Commissioner Joe Deviney. “Please do not bring, or ship, plants or fruits into the state without first checking with the Agriculture Department to make sure it is O.K.”

Applying best pest management practices, trained state workers will apply an attractant to telephone poles and trees 8-10 feet off the ground and out of public reach to an area of about 15 square miles. The targeted attractant is a mixture of OFF pheromone and an organic pesticide. The treatment is not harmful to people and other animals. Male flies are attracted to the mixture and die after consuming it.

The most common pathway for these pests to enter the state is by “hitchhiking” in fruits and vegetables brought illegally by travelers returning from infested regions of the world, or from packages of home grown produce sent to California, officials said.

The Oriental Fruit Fly is widespread throughout much of the mainland in southern Asia and neighboring islands, including Sri Lanka and Taiwan, and it has invaded other areas, most notably Africa and Hawaii.

The public may contact the Santa Clara County Agricultural Commissioner’s office if they have additional questions.